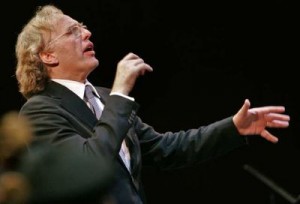 But it also had us glued to our chairs as Martin Haselboeck, the orchestra’s music director, balanced backwards on the edge of the stage conducting Bach’s massive score for two hours. It was a great spectacle.

A conductor, organist, and composer who splits his time between Los Angeles and Vienna, Haselböck called to mind Philippe Petit, man on wire. His 20-piece baroque band, with period instruments and line-up of nine vocalists, was crammed onto the church’s limited stage — leaving only a tiny triangle of space for the slender blond maestro.

Herr Haselböck coped beautifully, conducting Bach’s 400-year-old chorale masterpiece perched on a stairstep, bouncing on the balls of his feet, his heels unattached in space. 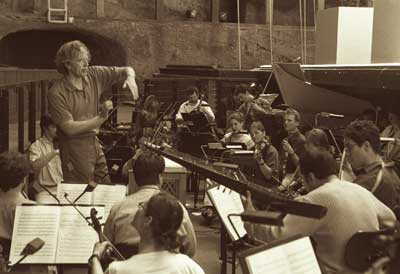 From this vulnerable position he wended his way through the Passion’s powerful polyrhythmic chapters, mouthing the German text along with his singers.

Smartly attired in a posh European-tailored suit, his body at times vibrating in Bach’s firey rhythms, he gave one of the best dance performances we’ve ever seen at a classical music concert.

Singing was outstanding, especially that of German lyric tenor Tilman Lichdi in the lead role of Evangelist. It was our first Musica Angelica concert. Absolutely fantastic.