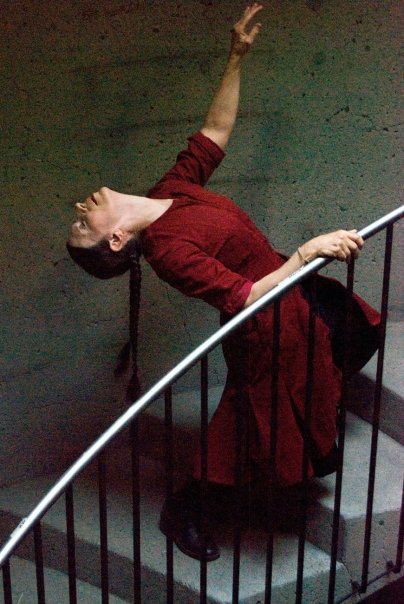 Multimedia artist Meredith Monk, labeled avant-garde for her reducing of dance, music, and drama to their most basic and powerful elements, gave the great voices of the Los Angeles Master Chorale a remarkable gift: their bodies.

Liberated from the oppressive bleacher arrangement that codifies standard chorale performances, breath and life infused their song. It was revelatory.

“Ascension” began with Monk seated on the stage floor, a small solo figure with her hair bound in trademark long braids running down her back. Between her folded legs she straddled the shruti box that accompanied her song.

Cupping hands ’round her mouth, this odd and wonderful artist started to yodel around Frank Gehry’s High-Art Temple. A grand procession of fiddlers and flautists played as they went. This meandered for moments that could have happily stretched for hours. Then in strolled the chanting Master Choralists — a joyous arts parade.

Monk’s new work “Weave,” a co-commission of the Master Chorale and St. Louis Symphony, was the event of the evening. Mezzo-soprano Kati Geissinger and baritone Theo Bleckmann, soloists, stood embedded in a small orchestra. Singing a capella, they swapped turns gurgling Monk’s mystical sound-syllables to a semi-shocked audience ~ nung, nung, nung, like a liquid popcorn machine. The gobbledy-gobble turkey noise percolated pleasantly, and soon harp, violin, and xylophone contributed their own burbles. It was highly coherent magic — and the golden light pouring on stage prolonged the music’s reach in the rarefied air.