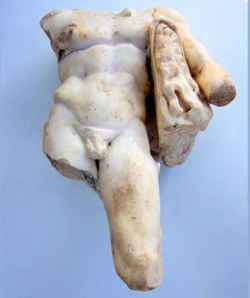 Okay, he’s not quite Israeli, he’s a Roman god, but they found him in Israel.

A rare second-century statue of the mythic hero Hercules has been found in Israel, archaeologists reported today. The buff marble masterpiece likely decorated a niche in a Roman bathhouse.

The intervening centuries have left Hercules headless, but his bulging muscles are still apparent, as is his club and the skin of the Nemean lion, which, according to myth, Hercules slew as one of his 12 labors.

According to Greek and Roman myth, Hercules was half-man, half-god, the son of the god Zeus and Alcmene, a mortal woman. Out of jealousy, Zeus’ wife Hera plagued Hercules with misfortune, including a fit of madness that caused him to kill his own wife and children. In penitence, Hercules performed 12 superhuman feats, including the slaying of the vicious Nemean lion.

The newly discovered statue was found at Horvat Tabernet, in Israel’s Jezreel Valley. The Israel Antiquities Authority uncovered the remains of a Roman bathhouse from the second century, along with dwellings and a well and channel that supplied water to the bathhouse’s large pool. The Hercules statue was found in the pool, amidst potshards and broken glass vessels.

thank you for this news, livescience.com