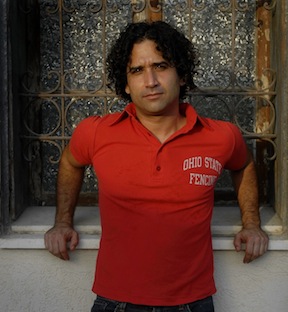 It’s been a Barak Marshall festival in Los Angeles lately and that’s the way it should be. Because this guy, a nervous bundle of Harvard-educated brains topped by a black-corkscrew hairdo, is the closest thing L.A. offers to a worldly — and if he continues on track — a world-class choreographer.

Snippets, versions, restagings, and bits and pieces of Marshall’s work have trickled our way recently. L.A. dance troupe, BODYTRAFFIC, has carved a niche in delivering Marshall’s manic, idea-driven, dance pageantry with credibility and technical virtuosity. In January they garnered for themselves and Marshall the top prize at the A.W.A.R.D. show. Cal Arts dance majors gave scenes from ROOSTER a good reading last December.

But it’s kind of like lovin’ “Swan Lake,” and then seeing the Kirov dance it. Two different things.

It packed a huge wallop when the dual-passport-toting choreographer set Israeli dancers loose on MONGER this weekend at UCLA’s Royce Hall. The Israelis — so vivid, so jiggy, so emotionally present, and such fearless performers — added a secret sauce that elevated Marshall’s beat-for-beat movement mania into a real theatrical experience. That’s somewhat gone missing in prior stagings.

Without specifically connoting it, there’s a tremendous amount of Jewish material in MONGER. And it carries an anxious, uncomfortable edge. It’s not a happy dance — ever. Something melancholic, desperate, and trapped burns on stage, as the dancers, playing beleaguered house servants, strive to please their insatiably demanding mistress (she’s presented as such from the servants’ perspective; we never see the old hag in action ourselves). They beg, plead, cajole, and demean themselves to Miss Margaret, and then, almost too late, rebel. Little clues indicate a disenfranchised and powerless population: heavy overcoats, suitcases, perpetual changes of clothes, splayed bodies in underwear, all signs of impermanence.

Not to mention a neurotic movement vocabulary best described as the beauty of the nervous tic.

Another contributing element is MONGER’s music, a very strong suit of this choreographer. Marshall mixes the dreamy, reality-denying songs of the 1930s and ’40s, on which Europe lurched into the dark ages, with the syncopated, rockin’-the-casbah beat of the hip Middle East today. It all sent up, at least to this viewer, the house of the Jews. And that house, hardly a welcoming home, is the world.

One comment on “Barak Marshall’s MONGER danced in mameloshen”