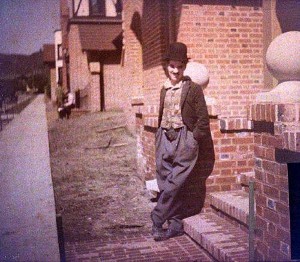 Anyone who trolls mid-city Los Angeles will recognize the wonderful Tudor-style building at right (you can click on the photo). Creative dynamo Charles Chaplin, one of L.A.’s real go-getters, built it in 1917.

And, there, leaning against the wall of his very own film factory stands the lovely Chaplin. It’s a pretty proud moment for a guy who was raised as a fatherless street urchin. The brick-solid movie studio was quite a notch up from the cardboard hangers that served most early filmmakers. Unusual for L.A., Chaplin’s digs have lasted.

Over the years, it’s been a nurturing home for California creativity; both Jim Henson Productions and Herb Alpert’s A & M Records, in their heyday, occupied 1416 N. Labrea Ave.

Wednesday night, Stan Taffel, a Chaplin scholar and fan, produced and hosted a wonderful birthday tribute at Hollywood Heritage for Chaplin who turns 122 today. The event, at “A Night at the Barn” featured a display of memorabilia, including Taffel’s own exceptional Chaplin photos and posters, and a screening of The Gentleman Tramp (1976) with the documentary’s writer/director Richard Patterson in person.

Patterson remains awestruck by his subject 39 years later. Hired onto the project after a more established director, Peter Bogdanovich, floundered after a first stab, Patterson worked with the infamous ’70s producer, Bert Schneider, without whose devotion, according to Patterson, the film would not have been made.

Patterson, who’s gone on to a stellar Hollywood career as a visual effects expert, said on Wednesday night: “[The Gentleman Tramp] means a lot to me. It’s intensely personal because I saw themes in [Chaplin’s] story that I related to. It’s as much about me as about him.

“What I relate to is the political aspect of his career and his commitment to art, love and family. Chaplin was an artist … and society stepped all over him.”

Meeting Chaplin, said Patterson, “was touching, intimidating. I was very young. I told Bert Schneider, I don’t want to do interviews … I want to use the films of Chaplin to tell the story of his life.” 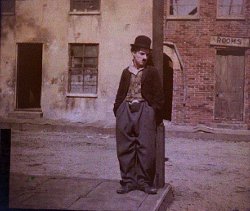 Indeed the documentary’s beauties include clips of Chaplin’s seventy-odd films, the early ones along with the great classics, City Lights, Modern Times, The Great Dictator, Monsieur Verdoux, Limelight. Also included: charming home movies of the family; brief interviews with Chaplin at old age in Vevey; and rare depictions of his enduring marriage to the extraordinarily beautiful Oona O’Neill.

But these marvels are countered, indeed horribly tarnished, by the docu’s revelations of how men with power, who were not Chaplin’s equal, hounded the artist about his politics for decades; key among them, Richard Milhous Nixon. The FBI engineered his systematic expulsion from the U.S. in 1952, branding Chaplin as a communist and a sex fiend, a salacious combination that gained resonance in the HUAC-era. Thank God xenophobic and paranoid right-wing nut jobs are a thing of the past in American politics.

A similar story, or so it seems to me  is that of Roman Polanski, another expatriate film artist booted out of the U.S. for fooling around with young girls. Thank you, U.S. justice system, for protecting American womanhood!