Charlie Chaplin to reappear at Cinecon

The big event at this year’s festival is the screening of a previously lost Charlie Chaplin film, “A Thief Catcher” from Keystone Studios, 1914. 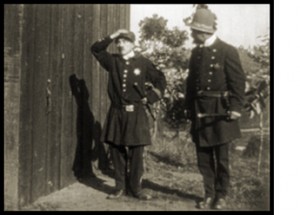 When he put it on a projector, he was astonished when Chaplin appeared as a cop about six minutes into the film for an extended two-minute cameo.

“My heart stopped,” Gierucki recalls. “I recognized him immediately.”

“A Thief Catcher” was in production between January 5-26, 1914, soon after Chaplin arrived at the Keystone studio, and it represents the second or third screen role for the soon-to-be world famous comedy star.

Robert Birchard, Cinecon’s president and author of multiple tomes on Hollywood history, reminds us that this film was shot in Edendale, L.A.’s nascent boulevard of filmmaking, now Glendale Avenue in Echo Park.