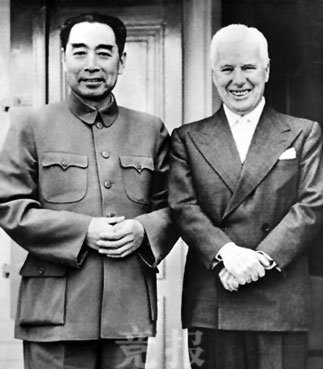 It’s kind of an ongoing  joke in Los Angeles that every neighborhood boasts a building or location that Charles Chaplin supposedly built, or invested in.

Alternately, in that place, Chaplin lived, shot a movie, or (most probable) partied.

The guy got around! He was at every social event, every film opening, each great hostess’s soiree. He was L.A.’s original party animal.

Chaplin also visited China; he took a slow boat there. The visit caused a huge stir in the 1930s. Thinking he could slip away anonymously to the other side of the world with his girlfriend, Paulette Goddard, he was instead feted as a huge celebrity generating headline news across the Middle Kingdom.

My good friend Steve Markscheid in Chicago, a longtime China expert, pointed me to this story, charmingly told in China Expat.

Lots of good photos posted there, including one of a China-market Chaplin imitator, a Brit who apparently made a good living in the 1920s channeling the Tramp.

But my favorite photo is the one posted above, of the elegant, debonair and erudite, French-speaking gentleman … do I mean Charles Chaplin? Hell no! I refer to Chinese Premier Chou En-Lai, one of the twentieth century’s great leaders, pictured here visiting Chaplin at his Swiss chateau en route to the Geneva conference in 1954.