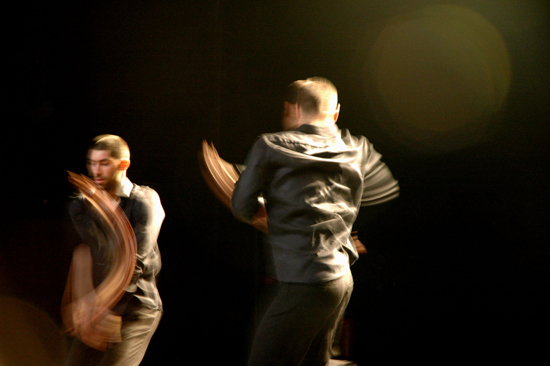 Two similar-looking guys .. black tee-shirts and trousers … dance on a stage. Together. For an hour.

[I am attending the ADF as part of a three-week long Dance Criticism Institute run by the National Endowment for the Arts.]

Gat, an Israeli-born dance maker now working from France, manages to intrigue his audience with that basic idea – but he takes it much farther. He’s a regular on the Durham festival roster, having previously presented his “Rite of Spring” and “K626” here.
Co-occupying a half-lit desolate stage with only a pair of audio speakers hung from the ceiling, the two men execute a rich series of gestural movements. Much of the time in squeakingly close proximity. The dance accrues density either in reaction to a recorded musical score or by the way the men develop their partnering possibilities. As it builds in complexity, “Winter Variations” is a strange and gripping show.
Both Gat and his excellent partner Roy Assaf served in the Israeli army before launching modern dance careers. With a soldier’s sense of duty, they face their audience square on, and plunge into a dance that has the rigor of basic training.

First helicoptering the arms, the men smoothly swipe their hands over their close-cropped haircuts, and then flip the hand over a single eye in a masking gesture. Clipped and punctilious, these moves seem directly lifted from the military. When their cycling arms morph into stricter semaphores, it evokes the air field dudes who steer jumbo jets into their parking spots. 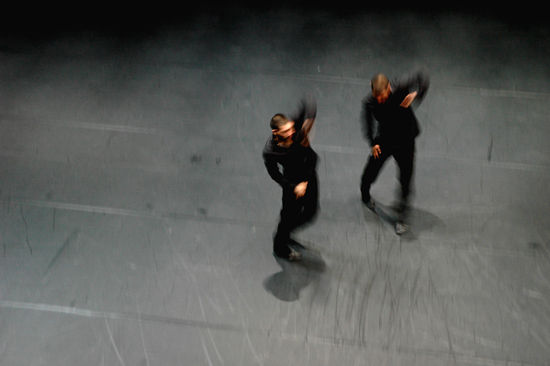 Picking up pace, the handholding duo spins around the dance floor. Romantic overtones . . . call in Fred & Ginger! Then both performers drop to their knees and hobble that way across the entire stage. It’s a sad, weird, upsetting image: okay, so now they’re crazy people.
Bare-boned dances of this ilk give viewers the leeway to make such literal associations. But what if “Winter Variations” were merely an interesting theatre piece about two guys dancing together? Would that satisfy? Oddly enough it does.
One of the evening’s big pleasures is that Gat and Assaf are very good dancers. They’re super-fit to withstand the non-stop calisthenics. But there’s also a sensual overlay and an homoerotic tone that demands more than pure dancing. It calls for a sense of vulnerability that both dancers deliver. In moments like the ones in which the two men, backs to the audience, crouch together under a patch of white light, Gat cradling Assaf in his lap, “Winter Variations” feels genuinely intimate.
Music also drives the piece. Gat accompanies his manly pas de deux with an IPOD shuffle of Strauss and Schubert art songs, Arabic guitar music, and, somewhat bizarrely, “A Day in the Life,” a song the Beatles recorded in 1967 when Gat was negative two years old.