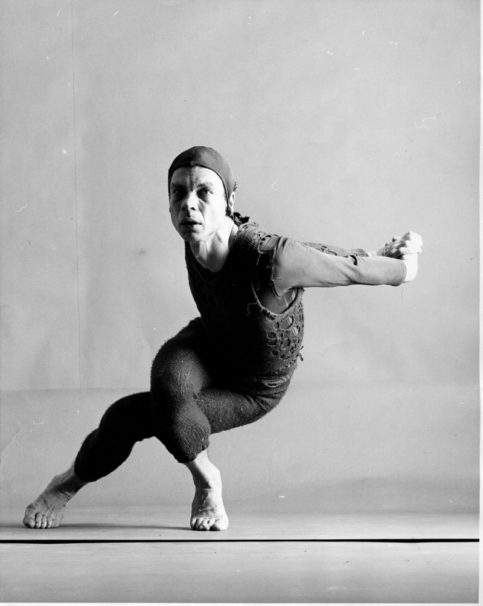 For those who did not have the distinct honor of face time with the great dancer/choreographer (I studied modern dance with ‘Merce’ as he was ubiquitously known in the dance world, and attended concerts by his unparalleled dance company many, many times over the course of decades), then get thee to LACMA, for Merce Cunningham, Clouds and Screens. This show, installed on the first floor of LACMA’s BCAM building, provides a hearty dollop of the Cunningham experience.

The above photo shows Cunningham in Changling (1957), a six-minute-plus video performance that is projected adjacent to LACMA’s formidable Richard Serra sculpture. How nice for the Serra to find a companion in Cunningham! In another cool connection, Cunningham’s raggedy Changeling costume was designed by Robert Rauschenberg, whose “Quarter Mile” tour de force is exhibited two floors above. Rauschenberg, of course, was Cunningham’s visual collaborator for more than 20 dance works, contributing sets, costumes and lighting.

Filmed in 1958 when the quirky, highly experimental and innovative dancer was in tip-top form, Cunningham, in Changling, resembles a wild animal in the forest. Insofar as we all observed Merce’s elegant process of aging, it’s a reminder of what a truly startling, iconoclastic young dancer he once was. Indeed, Cunningham was a brother from another planet … but see how pliant his feet, how marvelously muscled his legs, how freely spiraling his arms from his torso. And then, his artistic mien that added amazing crevices over time, and the wild, wooly hair that he let fly in his old age.

The two-gallery show (three if you count bobbling amidst Andy Warhol’s mylar pillows, “Silver Clouds” in the entryway) was beautifully overseen by curator Jose Luis Blondet in tandem with Cunningham collaborator, Charles Atlas, who arranged the nine-channel video installment first staged at the Walker Arts Center, MC9, in an adjacent gallery. 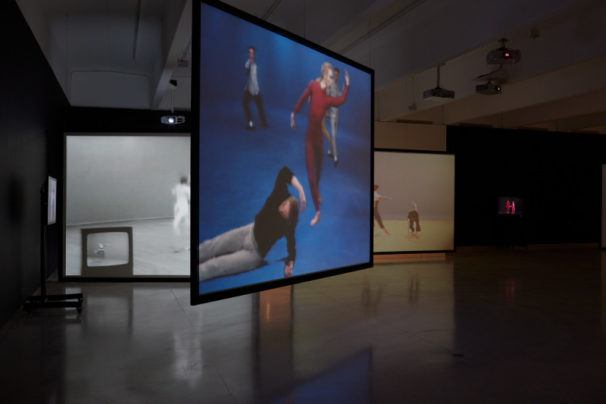 With hanging video screens of varying sizes facing all directions that allow for viewer immersion, this gallery is sparkling, fluid and fanciful, and most inspiring especially for dance fans. It displays multiple Cunningham companies over several generations, dancers preternaturally poised to deliver the boss’s peculiar dance language. Something that was so du moment for so long. Something that had such tremendous, brain-tickling impact. Something that long positioned dance in the arts vanguard in a way that it is no more.

My favorite: a duet performed in characteristic solemnity before the paint-peeling walls of Cunningham’s humble early studio prior to its relocation to Westbeth. The real deal, the art of dance.

Highly recommended. A must. I’m going back.