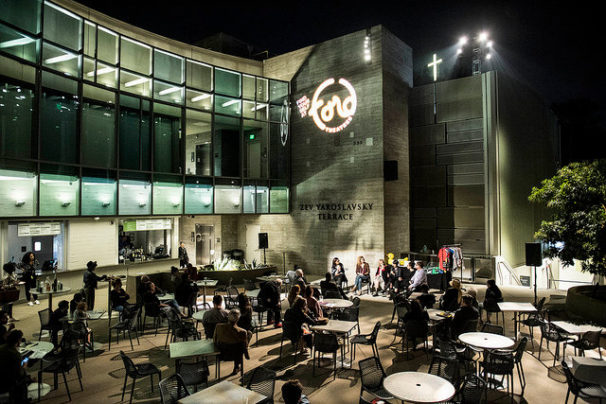 A distant, pulsing whir of ambient music accompanies the sight of a peculiar, tall figure as he rambles toward us. We spy him (or is it a she?) through the half-closed gate (or it a gate ‘half-open’?) at the John Anson Ford Amphitheatre’s loading dock. This creature, dressed in unisex coveralls like a hip garbage man, drags a long tail: a chain of strung-together Costco plastic bags. As he cycles in tighter and tighter, the coiling snake makes a creepy whooshing sound.

That ‘whoosh’ piercing the air conveys the wit and wickedness of the creator of “Loaded,” Heidi Duckler (she of the cleverly located site-specific choreographies). For her latest work on view at the Ford twice this weekend, Duckler seated her audience in the bowels of the Ford. For the record, it is the tidiest garage in Los Angeles. You could eat off the floor.

Rather than do that, Duckler’s four excellent dancers (Raymond Ejiofor, Lenin Fernandez, Micaela Taylor and Himerria Wortham, who also contribute choreography) instead performed a strangely touching pageant that accented its players’ emotional interplay through striking tableaux and spacial configurations. The one-hour “Loaded” confirmed the choreographer’s emphasis of elements beyond hanging from chandeliers, although over the years we have seen plenty of that. Owning the space, the quartet explored its crannies, whether as a group, or by breaking off into couple or solo bits. There were satisfying surprises such as two dancers swinging a third between them like a jump rope; or when the audience discovered two knoodlers in a dumpster. I wish they had done more in the outside space (they seemed to come indoors too soon), but it allowed for more emotional intensity rather than just dance design.

One dancer seemed to have a breakdown; another comforted her. A drumbeat grew as high-contrast lighting pitted dancers, in shadow play, against a concrete-block wall. The moment evoked the Hollywood version of a prison breakout.

It all went explored. The men rambled against the column in the dock’s center while the women worked the wall, stretching, twitching, and freezing in solid shapes.

Some business with a flag provided a disappointing denouement for all this lather, but then, in a grand finale, the newly opened metal gate revealed twinkling lights across the Cahuenga Pass. (It had turned from dusk to dark magically.) We were surprised, at the curtain call, to see that Justin Scheid and Sarah Belle Reid’s cool music was performed live, wishing they had not been tucked from our sight … Duckler did warn in her preamble that not every vantage point contained the full vista.

I loved the experience, and appreciate Duckler’s continuing fount of creativity as it spools forth. Press on, Heidi!