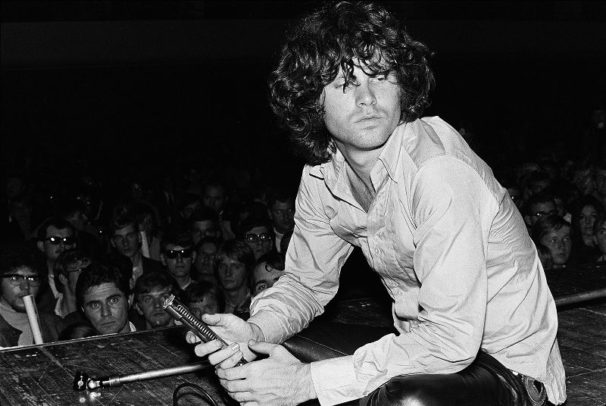 One of the people who visited the kitchen at Thee Experience was Owsley Stanley. The little man who dosed the whole West Coast with purple LSD traveled with the Grateful Dead. At Thee Experience, he liked to inhale the gas from whip cream cans. Leaning against the refrigerator door, he mischievously spooned ice cream into the mouths of anyone he could surprise. Peggy, a waitress, thought it was cute that he plied her with ice cream bites on each trip to the kitchen. It wasn’t long before she found herself transfixed by the pretty colors of a hamburger, then slowly becoming terrified that the burger was trying to kill her. She’d been dosed. 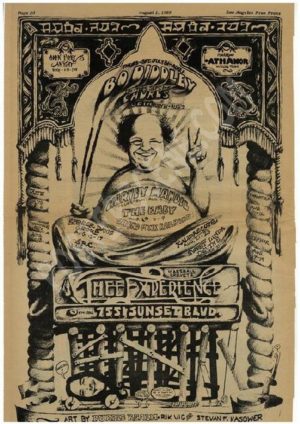 The large room was darkened but the wait staff passed by the bleacher section, a virtual black hole, to reach the kitchen. It was something of a gauntlet, as they were sometimes pawed, abused, or exposed to sexual acts and inebriated behavior.

Those bleachers saw some after-hours action too. The big-hearted Brevetz might provide crash space to a dishwasher under the bleachers. After-hour trysts, consummated on and under them, were also common.

But wild scenes were de riguer at Thee Experience. Drummers John Bonham and Keith Moon acted like drunken lunatics, and drugs were plentiful. A tall, slender groupie named Dani spent a lot of time under a table occupied by a superstar English band…before they had her on a table top. Bluesmen John Lee Hooker and Earl Hooker had simultaneous fun with a smiling groupie in the store room behind the bar. A Canadian band argued and physically fought over drugs.

Women dropped at the sight of Jim Morrison. Peggy the waitress had seen the Doors at the Cheetah in 1967, and had loved him from afar. She finally met him at a Bel Air party about the time the club opened, and discovered they shared Florida roots. Even drunk, she thought he was the most beautiful man she’d ever seen. A few nights later, at another party, they had a quiet, intimate talk; their time together lasted about a week. It wasn’t long before he appeared at Thee Experience with other women and parade them before her. After a tearful Peggy pulled her apron and went home crying, Ellyn the ticket-taker, in an admirable show of sisterhood, got him alone and really told him off. Like a naughty boy chastised, Morrison contritely listened.

He didn’t charm all of them. Thee Experience waitress Jaki Read said in 2009: “I didn’t care for Jim Morrison. He was like those really smart-ass high school boys who could quote Shakespeare but didn’t really understand what they were talking about. When you questioned them about it, you found that they really didn’t understand the work to any degree of depth. They were empty but rapid talkers; that was Jim Morrison. If we ever spoke at length, I was usually testing him. He tried to make fun of my boyfriend, Joe Lala, once. Now, Joe was twenty years old and had no intellectual pretensions of being anything other than what he was: a musician. Morrison made some sly comment about Joe being a lightweight and I threw him out of the house.”

Kirk Silsbee  publishes promiscuously on rock, jazz and the visual arts. He has been an arts·meme contributor for five years,