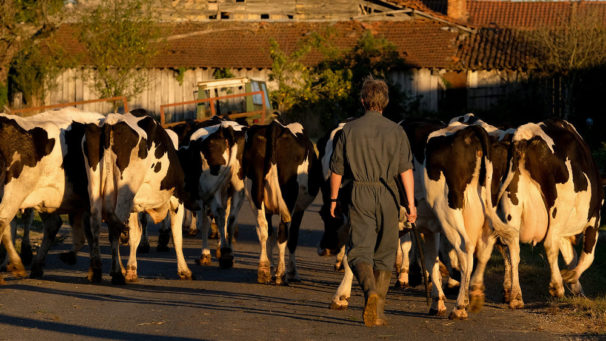 Fans of French movies are familiar with seeing scenes from the nation’s rural paysage, the countryside to which Parisians repair for weekends and summer holidays. The usual trope is the stone country-home where, seated ’round big outdoor tables, city dwellers slurp soupe, quaff wine, and discuss in non sequitors the meaning of it all. There they read books and relax. There they instigate impossible love affairs. There they eat really good cheese.

Did’ja ever wonder where all that cheese comes from? A noteworthy trend surfaced at COLCOA, the annual French film festival in Los Angeles now in its 22nd year. Amidst the festival’s 23 feature films emerged a rather more authentic version of the French countryside. Following several years of searing urban topics, the festival had films about farmers. Two of them starred cows.

No, we are not being rude to Brigitte Bardot! This agrarian movie-trend feels like a retreat. A recoiling from urban horrors, from the city’s bewildering, intransigent woes: immigration, multiculturalism, security and the painful memory of recent terrorism. It marks a return to essential Frenchness, a deeply conservative act. But there are pragmatic reasons for this as well. Even Melanie Laurent, COLCOA’s honored filmmaker, noted in conversation with critic Wade Major how difficult it is to shoot in Paris; how the so-called City of Lights, though the most beautiful in the world, is muted beneath a perpetual blanket of grey sky. By contrast, said Laurent, she would love to film in Los Angeles. “I love the light,” she repeated twice.

Let’s bring in the cows! 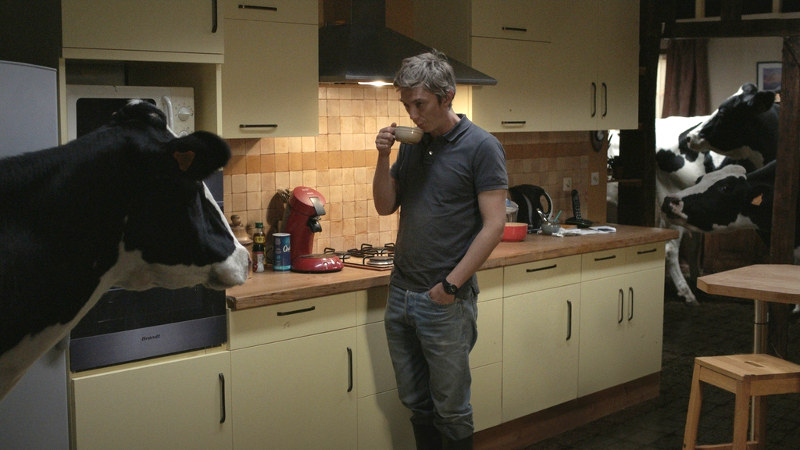 My favorite film of the festival thus far has been BLOODY MILK (Petit Paysan, 2017), an auteur work by a first-time director named Hubert Charuel. The son of a dairy farmer, Charuel shot his marvelously affecting feature sur place, on his parents’ farm in the Haute-Marne region of France. It’s a profound rumination about a changing world played by an obdurate cast — a stubborn man and his cows. Pierre (the photogenic and intuitive actor Swann Arlaud) is ready to do much to protect the health of his animals. Despite surfing youtube videos in a desperate search for information about mad cow disease, Pierre admits, when facing the precipitous end of his life and livelihood, that he “knows nothing else” than farming cows. The film inexorably advances a tale seamlessly told, beautifully knitting a deep connection between land, animal, and man. It transcends, striking chords of loss and ultimately of human loneliness, as Pierre bears the burden of his loss alone. To explain why Pierre takes his morning coffee amidst his cows (in the photo above) is to spoil the brilliant opening of this very unusual movie. 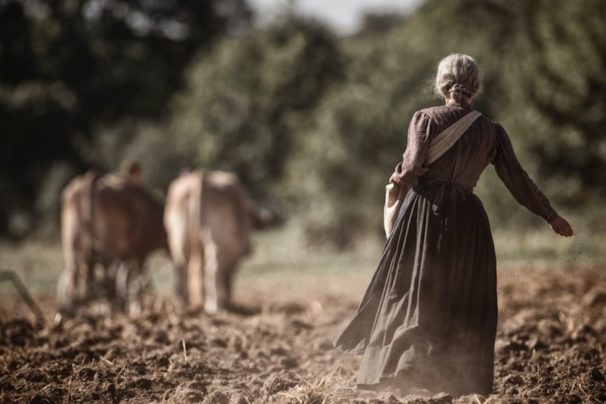 Not so much THE GUARDIANS (Les Gardiennes, 2017), although it does have cows. Lots. And wheat and all sorts of stuff that tough-lady farmer Hortense Sandrail (Nathalie Baye) and her daughter Solange (Baye’s real-life daughter Laura Smet) raise in their fields. The duo hold down the fort, as it were, while their menfolk go off to fight in WWI. Their challenge is not mad cow disease, but dumbo American soldiers who speak terrible franglais and try to get it on with the local girls. 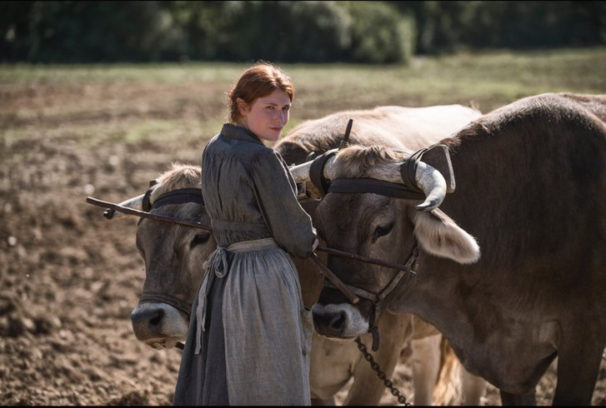 Despite the rapturous bucolic landscapes captured by writer/director Xavier Beauvois, the movie never arrives at a cosmic meaning equal to its visual expressiveness. Rather than expand in emotion, it narrows and narrows until at the end, we’re left with a hollow exchange of petty meanness by Baye’s character (Baye in a performance so restrained it whittles minimalism) toward an outsider, the redheaded dairy maid Francine (Iris Bry). Much time passes to little purpose in this arrhythmic, 134-minute movie. It is a fatty slab of meat that minus 20 minutes would make a lean cut.

Even the sheep were saying, “Baaah … baaahd.”

COLCOA | thru Monday at the DGA