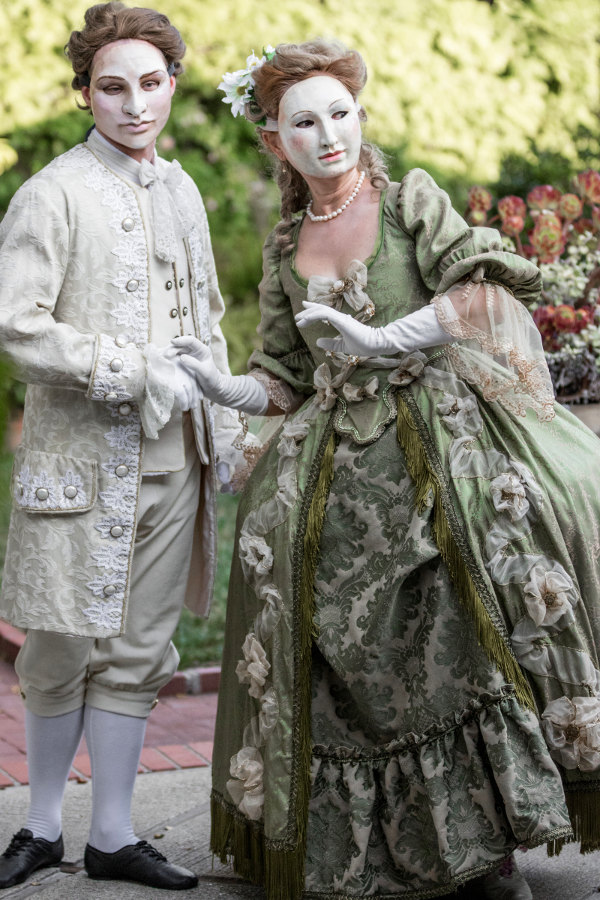 PausePlayPlayPrev|Next
Nijinsky left behind the seeds of an unfinished ballet he began in 1913. That was the rather infamous year in which the dancer/choreographer unveiled his provocative The Rite of Spring to the shock and awe of le tout Paris. He also premiered Jeux, an overtly sensual ballet for three—a love triangle—that subtly foreshadowed the oncoming war. Begun during a voyage to South America, Nijinsky’s Sarabande, in contrast to the modernist themes of his other two 1913 ballets, was steeped in a Baroque aesthetic. It drew upon the dancer’s early training at the Imperial Ballet School and it echoed the reverence of his impresario, Serge Diaghilev, for the Baroque.

These revelations—and a quest for any inkling of what the precocious and brilliant Nijinsky might have conjured had he completed the work—formed the fascinating theme of a historic dance workshop held at the University of Washington in Seattle last weekend. “Nijinsky, The Sarabande and Parisian Nights,” a four-day event, chock-a-block with dance classes and lectures, was organized by New York Baroque Dance Company’s effervescent artistic director Catherine Turocy, a road warrior for 17th and 18th century period performance, a French Chevalier in the Order of Arts and Letters and BESSIE Award winner.

A group of avid dance detectives numbering thirty students, many of them experienced dance educators, gathered to explore possibilities. Leading the investigation with Turocy were her two scholarly collaborators, Millicent Hodson, the renowned Nijinsky specialist, and Doug Fullington, an expert in dance notation.

Hodson, who along with her husband and partner Kenneth Archer create facsimiles of lost works by 20th century choreographers and designers, has been a leading force for historic restagings. (We had the Joffrey’s forceful “The Rite of Spring” in Los Angeles for the ballet’s one hundredth birthday in 2013.) Millicent’s presence graced the workshop with her penetrating deconstruction of steps (she is an ace “regisseur”) and her high intellect about the meaning of it all. Coiffed in her signature blonde ballet bun and headband, she taught snippets from both “Jeux” and “Rite.” But the real discovery was focused on the “Sarabande.”

Turocy, Hodson and Fullington pored over a single sheaf of notation written in Nijinsky’s hand to restage the one extant fragment of a ghostly ballet. The students, delighted to be guinea pigs, posed in the pleasantly curvaceous shapes of Baroque dance. Slowly Nijinsky’s artful scribblings emerged into three dimensionality, an opening tableau very much in the Baroque style in that it replicated a sunburst, a classic Baroque motif. 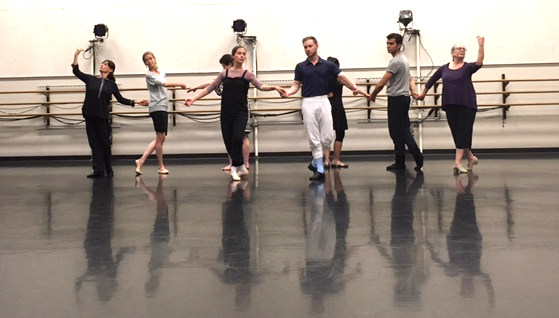 Nijinsky, a tragic figure who over time has been revealed to have been a genius, a savant, a great modernist, was a rarefied ‘bridge’ figure between two centuries. He seemed to swap with amazing versatility between his classic roots and his lusty rejection of that paradigm to forge a futuristic dance. (Perfect evidence is on view in the range of his three 1913 works.)

Hodson coached students in Nijinsky technique based upon his own odd body type characterized by strong hips and legs, and lengthy narrow torso. Emphasis was placed on the dancer’s fulsome use of his elongated, thick neck in extreme positions, such as his thrown-back head in L’Apres-Midi d’un Faune which moves the head into a position far beyond the normal range of classical placement. The tipped-back and “displaced” neck is also on view in Michel Fokine’s Carnavale. It shows up, as well, in Petrouchka, in which Fokine allowed Nijinsky and others to create their own solos. (This opportunity, according to Hodson, birthed Nijinsky the choreographer.) Other of Nijinsky’s modernist movement includes a fluid spine, parallel feet, and flat ‘spatula’ hands. 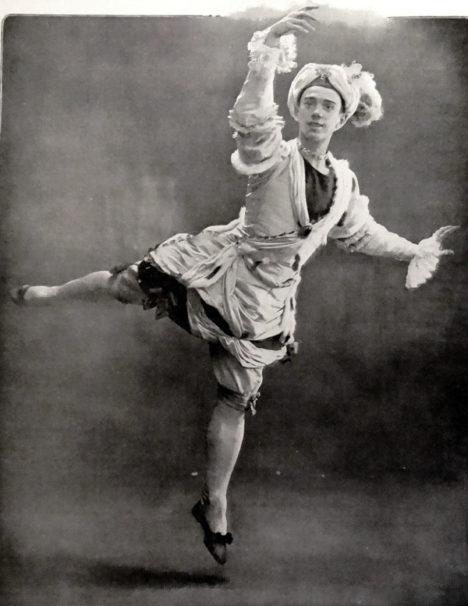 In separate classes, Turocy coached a Sarabande, an elegant courtly dance with measured timing, mirroring images for couples, and twisting-and-turning enchainements. The near daisy-chain structure spawned confounding physical tongue twisters for those not born in the 18th century. But it was a huge joy once mastered. The Sarabande was also beautifully danced, in a workshop showcase, by Anna Mainsbridge and her colleages at Seattle Early Dance.

Fullington, who is part of the management team of Pacific Northwest Ballet, is a musicologist and fluent reader of Stepanov choreographic notation. He said, “Nijinsky would have learned notation [at the Imperial Ballet School]. His notation was very neat and tight and detailed. He used a straight-edge in notating.”

“We’re teasing out a through line of Baroque ballet as it worked through the Russian tradition,” said Turocy. “We know that the Russian Imperial court was Francophile. They brought French ballet masters to train Russian dancers. A great example was Fokine’s Le Pavillon d’Armide (1907) for Nijinsky and Pavlova. Diaghilev did not just admire the Baroque, in his case it was a love affair. It’s ironic that he presented his Baroque-influenced Russian dancers and works in Paris. Because, at the time, French ballet was in decline.”

In the summer of 1913, explained Hodson, following Jeux and The Rite of Spring, Diaghilev, together with Alexandre Benois (the influential designer/art director of the Ballets Russes) and Nijinsky went to Baden-Baden on an art tour. Following this strong dose of Baroque sculpture and friezes, Nijinsky boarded the Ballets Russes steamliner for Buenos Aires. While on deck, Nijinsky worked on his Sarabande. The one-page notation remains.

“The workshop has been a delight,” said Turocy. “It’s been a laboratory of thought. Millicent, Doug and I are discovering things about Sarbande and the Baroque period and Nijinsky’s era. We’re using the students as a laboratory to experiment with our theories.