Review: The Joffrey Ballet’s “The Rite of Spring” at the Music Center 5 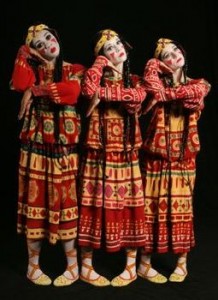 We did not hoot, we did not holler, but we let rip with a bracing “bravo!” for Vaslav Nijinsky’s “The Rite of Spring” (Le Sacre du Printemps) at the Dorothy Chandler Pavilion Friday night. First, because the Joffrey Ballet’s 100th anniversary reconstruction of the historic Ballets Russes production was great. But mainly because … to remain silent just seemed wrong. It was a dance lover’s duty to greet this seminal ballet — still disturbing, still powerful — by bringing on ‘da noise.

Because that’s how it happened May 29, 1913. “Sacre”’s infamous premiere erupted into shouting matches between Ballets Russes factions at the Théâtre des Champs-Élysées. Nijinsky, undoubtedly shaken to his sensitive soul, bellowed Stravinsky’s polyrhythmic counts to his dancers from the wings. Meanwhile, in the hall, chairs, canes and hats, even fists, flew.

Watching this colorful and weird pageant last night, thoughts ricocheted. First stop, pre-modern Russia to observe a peasant village enact a pagan ritual — a human sacrifice. Oh those animals; how could they be so primitive? We hold civilized debates over our right to mow down fellow Americans with assault weapons. Then, advance to Paris, 1913, where Nijinsky’s use of hunched-over backs, turned-in toes, and shuffling around the stage yanked ballet into a new zone. He prefigured modern dance, and in this work, German expressionism. Fast-forward to today, where ballet is again reaching for a new dance language, often grasping at straws. The best evidence came in the program’s two comparatively pallid remaining pieces: Stanton Welch‘s very thin “Son of Chamber Symphony,” set to even thinner music by John Adams; and Christopher Wheeldon‘s “After the Rain,” to an Arvo Part score, a much better work but marred by poor casting in the closing duet.

At the center of “Sacre” lies a great female role, “The Chosen One,” danced wonderfully Friday night by Erica Lynette Edwards. The Raggedy Anne stepchild of Odette and Prince Siegfried, her head tilted forlornly, she’s a figure of major pathos. On the cusp of being sacrificed by her community she presents herself to us: her face painted, braids flying, eyes wide with fear, body convulsing in spastic twitching. Her broken-bird-wing arms are something I’ve never seen in dance. The choreography for “Chosen One” solo alone represents a humongous dance advancement from Petipa’s era. The Swan Lake choreographer placed Odile at center stage for 32 fouettes. That’s a strong statement. But Nijinsky’s infinitely more expressive solo goes so much deeper.

Discrete dance language is allocated to each of several groups — elders, girlfriends, the village’s young men, all donning distinguishing costumes and headwear. There’s romping, lots of it, in patterned circles and lines. The schlumpy steps intermingle, accruing complexity and power. I just loved it … that music! Nicholas Roerich’s beautiful backdrops as well as his vivid Russian peasant costumes were painstakingly recreated by Millicent Hodson and Kenneth Archer. Dance and art historian respectively, the two are visiting Los Angeles from the U.K. (what an honor) to join in a “Rite of Spring” seminar today. This married couple implemented their reconstruction skills on behalf of company founder Robert Joffrey whose (first) restaging of “Rite” also premiered in Los Angeles, at the Chandler, in 1987. At a post-performance reception, Joffrey was praised for his determined and heroic efforts on behalf of Diaghilev and Nijinsky.

Also on hand were three former Joffrey ballerinas who alternated, in 1987, as “the Chosen One”: Beatriz Rodriguez, Carole Valleskey and Jodie Gates. Valleskey, Gates, and another original cast member, Leslie Carothers-Aromaa, have settled in Southern California. Indeed the southern California connections to “Rite” have instigated an entire community conversation organized by the Music Center for the edification of all. We’re attending a symposium this afternoon and plan to enjoy the exhibition “Stravinsky and L.A. Dance” organized under the aegis of Music Center Vice President of Programming, Thor Steingraber, with significant participation and input from Glorya Kaufman Presents Dance at the Music Center’s Dance Director Renae Williams Niles.

A second program, tonight and Sunday, features William Forsythe’s hyperballet, “In the Middle – Somewhat Elevated.” I’m going back to see it — even though I’m already in the middle extremely elevated.

5 thoughts on “Review: The Joffrey Ballet’s “The Rite of Spring” at the Music Center”