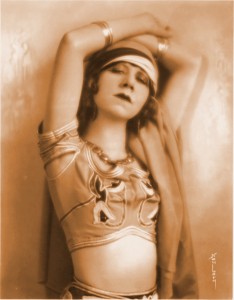 It is so thrilling to have a visual arts exhibition accompanying our Joffrey Ballet performances this weekend. Installed at one end of the Dorothy Chandler Pavilion’s glittering mezzanine level, the display feels like an historical moment for L.A dance.

Modest in appearance but profound in impact, the exhibit gathers photographs of innovative dance that poured forth concurrent to the film industry’s great creative burst of the 1920s and ’30s. It gives form to an idea that’s been gathering steam: that Los Angeles wasn’t just a haphazard, faraway outpost of American dance in the twentieth century, but the city was a key incubator in the art form’s development. The show garners all necessary chutzpah and splendidly tosses a rich cast of players against a wall. Much will stick in my opinion.

The main event of the weekend is the Joffrey Ballet’s historic reconstruction of the infamous lost production of the Ballet Russes’s “The Rite of Spring” choreographed in 1913 by Vaslav Nijinsky and almost immediately gone missing. The exhibition, Stravinsky and L.A. Dance, takes the ballet’s composer as its reference point, positing that Igor Stravinsky’s creative influence on dance-makers in Los Angeles was significant. 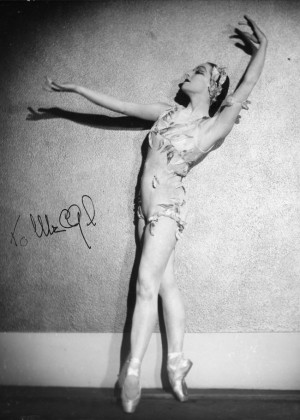 I particularly appreciate the righteous emphasis placed on the strong female contingent, represented by the three figures shown here: Norma Gould (above), an early modern-dance pioneer and peer to Ruth St. Denis and Ted Shawn; Nana Gollner (right), student of Theodore Kosloff, a solidly trained technical ballerina who was the first American ballerina to garner a credible following in Europe; and the formidable Bella Lewitsky (below), protegee and muse of Lester Horton whom Horton cast as “The Chosen One” in his own modern-dance version of “The Rite of Spring” at the Hollywood Bowl in 1937.

Gollner’s legs of steel were the byproduct of her Russian teacher attaching weights during training. Kosloff, among others, is featured in the show, viz., Adolph Bolm, Ernest Belcher, Michio Ito, Kosloff, Serge Oukrainsky, Andreas Pavley, George Balanchine and Horton. 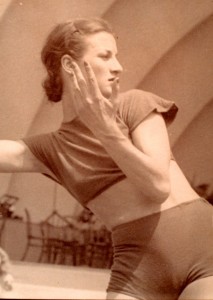 programs presented at the Hollywood Bowl and Philharmonic Auditorium in the 1930s.

The organizers have done a super job of weaving the disparate roots of classical ballet and modern dance. This overheated rivalry is rendered innocuous by side-by-side treatment in the exhibit. Heck, in real life, one building — Trinity Auditorium (god bless it, it still stands on lower Grand Avenue) — housed Kosloff’s ballet studio in its basement (Agnes De Mille cranked her first plies at his barre) while upstairs Ruth St. Denis and Ted Shawn taught Charles Weidman in an atelier. Weidman regularly snuck into Kosloff’s class unbeknownst to the barefoot duo.

Running through this complex narrative was the influence of Stravinsky, in a real way because his 30 years of residence in L.A. spawned myriad artist salons, dialogue, discussions, and projects; and on a symbolic level the exhibit suggests that Stravinsky’s clarion blast of modern music at the Chatelet Theater in 1913 reached all the way to California. Here Europe’s emigres settled and here, drenched in sun, they grappled with modernism. The exhibit asserts that the atmosphere in Los Angeles, so far from Europe, was loose and unconstrained with strong doses of bohemianism and nature-communing. The dots are, again, disparate, but the exhibit goes far to connect them. 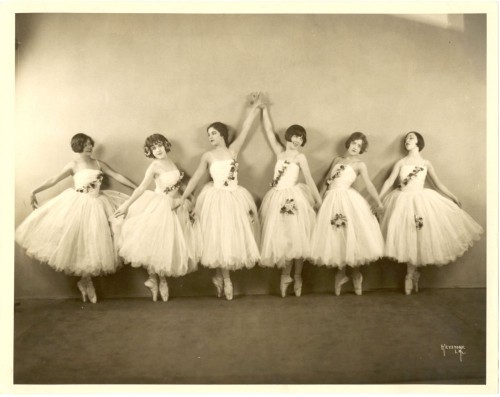 One of my favorite images shows a line-up of ballet girls taught by the great English-born master instructor Ernest Belcher, a player in early Hollywood and the dad of Marge Champion. The girls appear unshackled by ballet buns; indeed they are coiffed loosely, flapper-style. They are bobbed ballerinas. Yes, there would be ballet in Los Angeles. But it would be our way.

Photograph of Belcher Ballet dancers in
Phantom of the Opera at the Hollywood Bowl, 1926
Courtesy of the Music Center Archives/Hollywood Bowl Collection