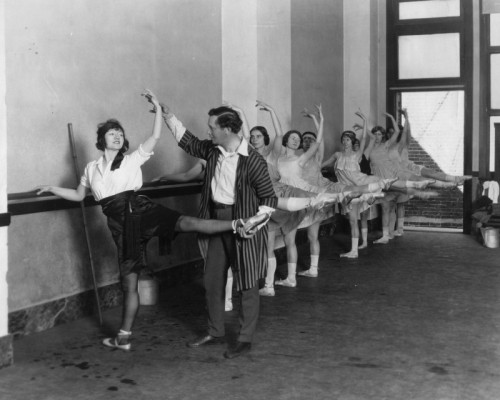 The photo above (click on it for detail) shows the talented and charismatic Russian actor-dancer Theodore Kosloff coaching a barre-ful of Paramount Studio chorus girls circa 1922.

The ballet master is giving hands-on instruction to silent film star Betty Compson with whom he co-starred in The Green Temptation that same year. Kosloff’s ballet training of Compson led to this startling pose in the film.

One famous dancer who studied with Kosloff was Nana Gollner. Another was Charles Weidman, then a Denishawn dancer and one of the early pioneers of American modern dance. Weidman noted that Kosloff would “sit in lounging pyjamas in a chair with a bamboo back, barking out counts in Russian.”

Was Kosloff a fine instructor? Malcolm McCormick, co-author of the 20th century dance history book, No Fixed Points, says: “Kosloff was sending dancers to New York in the 1950s. They arrived strong and rigorously trained — they had been required to wear weights on their angles to develop strength.”

In her 1952 memoir, Dance to the Piper, choreographer Agnes De Mille, who also studied with Kosloff, describes the annual Christmas party the Russian hosted at his home:

“At Christmas there was a table covered with gifts, photographs for the first year pupils gold pins for the second year, and pins with additional diamonds and wreaths and bars for the veterans. We were called out singly by name and given our gift. We then made a reverence, said “thank you” in Russian and retired.”

Marc Wanamaker of Bison Archives owns one of the pins and shares it with us.

Kosloff taught class at his Hollywood Boulevard ballet studio the day he died in 1956.

Read more about Theodore Kosloff in my article in the Los Angeles Times.