Wolf men and other men 2 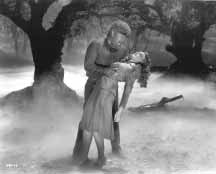 The legendary art director followed that enigmatic statement by noting how television technique has infiltrated feature film production — in a bad way. According to Boyle, today’s movies are “all talking heads.”

“It’s all close-up. The actors have no legs. There is no environment,” he ranted, as much as a nice, well-spoken 99-year-old gentleman can rant.

“Characters need to have a relationship with their physical environment. We created that beautifully in the Hollywood studio system. We had great craftsmen.”

Boyle was nominated for four Academy Awards for art direction (The Shootist, Fiddler on the Roof, Gaily, Gaily, and North by Northwest). In 2008, he received an honorary Oscar for lifetime achievement.

The tribute included a screening of the moody expressionist horror classic, The Wolf Man (Universal, dir. George Waggner, 1941). As a young man, Boyle was assistant art director on the film. Lon Chaney Jr., of course, stars as Wolfie, towering weirdly over the petite Claude Rains who plays his father. Bela Lugosi appears, all too briefly, as a gypsy dispensing the Hungarian evil eye. All howling, biting, chomping and chewing takes place in a beautiful forest (a built set) somewhere in Mittel-Europa. Forests there apparently come fully equipped with fog machines.

Boyle is an unrepentant booster of Hollywood artifice. “Los Angeles was a wasteland when the film industry began. It was a desert. Because L.A didn’t look like anything, [it freed us to] create worlds of our imagination. We built them on the back lots of Fox, MGM, Warner’s, Universal, and Columbia.”

He rues the over-dependence on location shooting and the dearth of original sets of movies today. “The craft and imagination of cinema has been lost,” he said. “Sets are not built anymore. We had a full European street at Universal. We used it in The Wolf Man, as well as remnants of the cathedral from The Hunchback of Notre Dame.”

One location of his choosing worked out well, however: “For the cornfield sequence in North by Northwest, Hitchcock wanted somewhere very flat. He used a field I knew in Bakersfield. I knew it because I grew up nearby.”

I recently viewed an extremely well made, highly instructive documentary devoted to the contribution art directors make to movies. The film is Masters of Production, The Hidden Art of Hollywood  (2004) and it features Boyle, as well as famous art directors on films like The Godfather, Citizen Kane, Chinatown, and others.

2 thoughts on “Wolf men and other men”