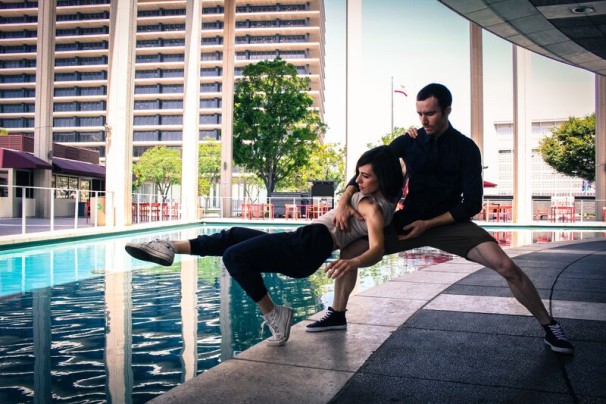 The concept – four works by four Los Angeles dance companies, set around the Grand Avenue campus, with the audience divided into three groups migrating to view – worked well. Everyone gathered on the Music Center Plaza for the finale, a piece by BODYTRAFFIC. 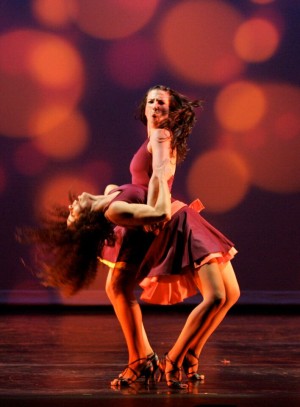 The arresting voice of Magaly singing “La Voz de Oro”s opened Ana María Alvarez’s “wade in el agua.” (Alvarez is artistic director of CONTRA-TIEMPO.) It featured eight brightly dressed female dancers who walked slowly into the Taper pond and dipped their arms in the water. Gradually, runs and kicks created sparkling water arcs – dousing a few audience members. The choreography, ranging from meditative to percussive, made the most of its liquid environment. A program note said Alvarez wants to “confront the harsh realities of race and water in the United States.” I saw more water than race.

Race was clearly the subject of Tamica Washington-Miller’s “Message for My Peeps: The Message, Installation #5,” confidently performed by Lula Washington Dance Theatre on the steps of Disney Hall. A child in a white and yellow dress sat hunched on one step. An elegant female dancer in flowing white appeared at the top of the steps and executed a series of simple, gentle gestures. The child copied. One generation teaching the next. More dancers, in street clothes, made good use of the stairs with hints of hip-hop, street dance, and high, high extensions (can we let those go for once?). There was anger, fear. They dropped to the ground – dead or defeated – before again rising. While references to Sandy Hook and the Dalai Lama on a video that played throughout may have been relevant, it was a distraction, and the screen was too far from the dancers. I could have done without the overly idealistic ending as well.

Members of Ate9 dANCEcOMPANY, led by artistic director Danielle Agami, and BODYTRAFFIC, were the evening’s most technically accomplished. Steeped in gorgeous Gaga-driven movement, Agami and dancers were brilliant. Love that Micaela Taylor. But talk about Dance of the Absurd. As we entered the Dorothy Chandler Pavilion’s lush Founders Room, dancers on dark red, overstuffed sofas and chairs played cards, moved plates. A sound collage included loud ticking and a French chanteuse. One dancer spoke into a megaphone as she walked, holding a clipboard. I think she said “enjoy the nonsense.” And I did. Reddi-whip played a role. The dancers lifted and moved an audience member in his chair. Two dancers wore white leather dog collars tied together with a chain. Nothing really made sense, although the title, “Kelev Lavan” (Hebrew for “white dog,” also the title of a French book on race relations), gave a hint. I relished the dancers’ technical strength and distinct movement personalities – each choreographed one of seven short sections. The work’s commitment to the absurd had a weird hold. 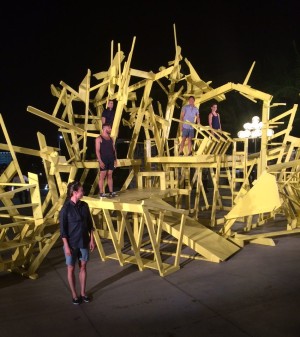 BODYTRAFFIC’s “Restructure” premiered in the same location last year, but this was my first viewing. Victor Quijada’s choreography was set on and around Gustavo Godoy’s huge, yellow, angular sculpture, which, brightly lit, dominated the Plaza. The dancers moved in a connected, flowing group. Like monkeys or a swarm of ants they climbed the sculpture’s ramps and platforms. Movement phrases were smooth, propelled by bodies contacting bodies, and the dancers were accomplished, but this piece never gelled. The choreography was dwarfed by the structure.

“Moves” repeats for two performances next Monday and Tuesday.