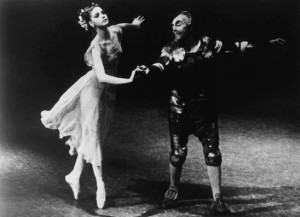 At left, an iconic photograph of George Balanchine partnering Suzanne Farrell in “Don Quixote” for New York City Ballet. Wendy Whelan/Restless Creature, which we enjoyed Saturday evening in Long Beach, brought to mind this historic pairing — a great choreographer dancing with his muse. The four-ballet program, premiered in 2013 at Jacob’s Pillow Dance Festival, got across beautifully on the Carpenter Performing Arts Center’s dance-friendly, arena-style stage. For this viewer, the dance event of the season. 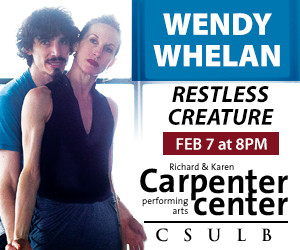 Balanchine’s chivalrous comportment with Farrell was a memorable treat for audiences in 1965. Fifty years later, former NYCB principal dancer Wendy Whelan (in her boundless versatility and rapturous spirituality Farrell’s heir) made the marvelous and somewhat offbeat decision to launch her post-ballet career squired not by male cohorts, but by a roster of well-selected choreographers dancing in their own creations.

A fun concept that both delighted and worked. Four ballets delivered commercial free, that is, without intermission (the iron-limbed Whelan could pull that off), showcased a brave ballerina’s foray beyond the classical genre. It offered a bonus for the house: not only a satisfying tour of contemporary choreography, but, hey, the choreographers, a male harem for a deserving diva, one after the other, could shake a mighty leg! 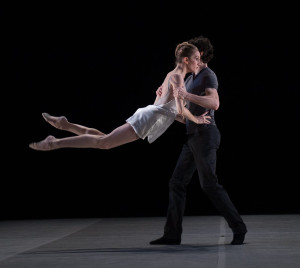 The program could not open stronger than with “Ego et Tu,” a wittily named duet by arts·meme favorite, Alejandro Cerrudo, Madrid-born, now in residence at Hubbard Street Dance Chicago, his “Last” for Aspen Santa Fe Ballet such a great calling card. Cerrudo just rocks; he spews. The invention began with smart music curation – snippets from Max Richter, Philip Glass, Olafur Arnalds, Gavin Bryers. Bathed in beautiful high contrast light design, Cerrudo’s duet is in fact a trio … for two dancers and this wonderful music, so meltingly did he and Whelan embody the sound. Clad in (she) a white tunic and (he) grey teeshirt/trouser, the duo exploded in rapid-fire curving arm-jabs, like sets of parentheses in space. Then he went liquid and rubbery, while she tightened up, her steely legs rigid. Finally, Cerrudo tucked and wrapped the slenderella around his body. Touché. 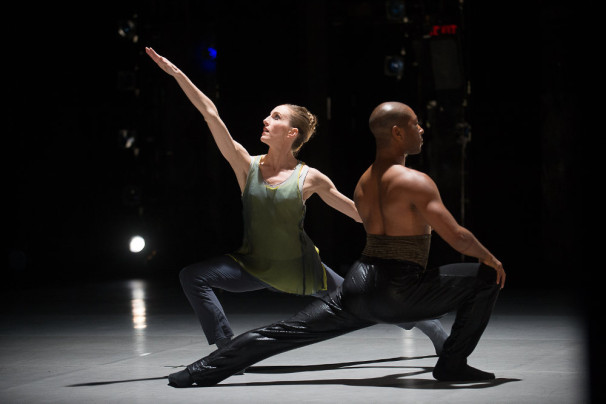 Then kame Kyle. Kyle Abraham, who in his street-infused contemporary mode is one of our most beautiful dancers (his Abraham.In.Motion company to appear next weekend at Royce Hall) passed his muscular squiggles onto the compliant Whelan. It was fun watching her perform Kyle’s body waves and frenetic explosions to a twangy Eastern European-infused score by Hauschka, Hildur Guonadottir. The work skewed sad and other worldly; it was moody, tempered, craggy in a nice way. 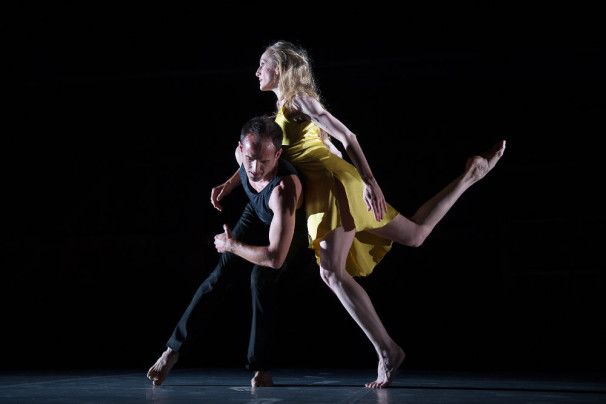 When out rolled the fourth piece, “First Fall,” in crept a certain (repetitive) tedium. But that was hardly choreographer Brian Brooks‘s fault. He put a yellow-frock-clad Whelan, her hair hanging loose, through a series of ghostly, vacant tilts, and then came a beautiful thing to watch: a forward-leaning walk, a downstage crossing, her scant weight supported by Brooks. A repeating movement motif had Whelan in releve, falling backward, then caught by Brooks’ body. (Every woman needs a man to do this for her.) Struck me as a profound visualisation of the passage of time, a lovely close to an evening of time so very well passed.

2 thoughts on “REVIEW: Ballerina Wendy Whelan, restless for a reason”