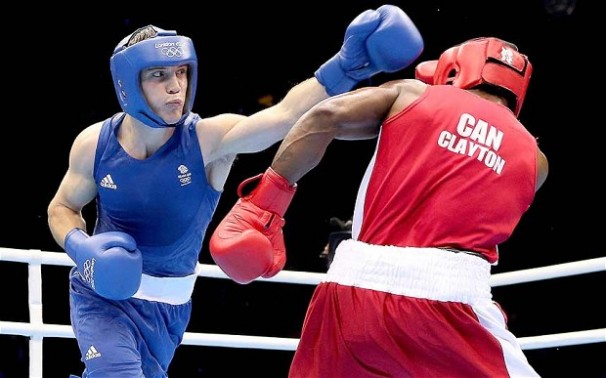 “It’s the second night of the third week of the 11th year of the New Original Works festival,” announced Mark Murphy, executive director of REDCAT performance space Friday night in a pre-show greeting of his audience. Surveying the full house of folk who track with emerging performance art, Murphy’s flickering smile seemed to convey, “But hey, who’s counting?”

The third and final weekend package of new works was structured not as the standard ‘three-pack’ of 20-minute-long pieces. Rather, two major works each lasting upwards of one hour, comprised the program with a nice break in between.

The evening did not particularly cohere given its unmatched halves. It did call to mind a smackdown between two middle-weight boxers. (The match went, by a decision, to Fleck.) But the pairing gave off interesting contrasts. 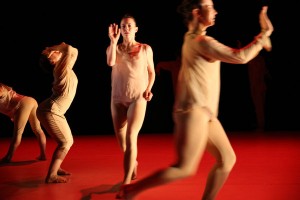 The somber and hard-driving Agami, a descendant of the Batsheva lineage who intrigues us, having relocated from gloomy Seattle to Los Angeles, now needs to let the sun shine in. That does not mean “Be cheerful” (we would never ask for that) but rather, “Try a little transparency.”

This latest work, which will be featured in the young company’s upcoming showcase at Wallis Annenberg Center for the Performing Arts, is a pungent pageant for ten dancers. It is chock-filled with Agami’s confident, wicked and contrarian movement invention. 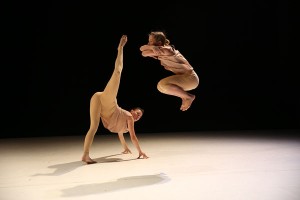 They cleave primarily to the earth; there’s lots of standing, ostrich-posing, and gritty use of the floor, low down. A bright stroke has dancers popping in from the wings — a stage entry. Then, utterly unexpected, they drop to the ground with an inelegant thud. Whereupon the stagelights black out.

This kind of subversive poke-in-the-eye is characteristic of Agami. She likes messing with audiences. With sound-sampler Omid Walizadeh’s Middle East-inflected house-music thumping at full volume, robots decorate the stage, pause in inexplicable stillness, then sally forth, equally inexplicably. There’s tippy-toe walking, backward walking, crab walking. The pace picks up just in time, rendering “For now” as a “dance” rather than a “weird display of model-mannequins.” For way too long, the work is bathed in flattening, harsh white light, then an overgloss of red softens its edge.

The relentlessly closed-off dance’s penultimate moment gives off a clue when a tidbit of spoken word announces, “Iranians like parties and gatherings.” Whaaa??? Okay! Dance done. 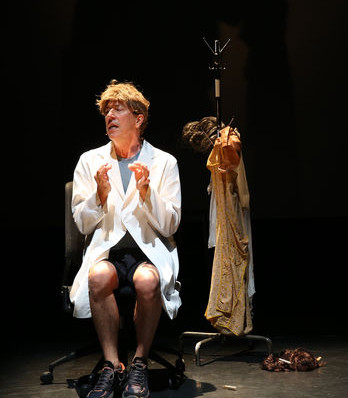 Opening the evening, the polar opposite: a journey through John Fleck’s amazingly twisted, yet utterly accessible (granted the x-rated content makes it not for everyone, though Fleck seems to suggest we all fester in the gnarly fantasies that propel his characters) hilarious and virtuoso ‘staged screenplay,’ “Blacktop Highway.”

Fleck’s one-man tour-de-force enactment of a wooly American family (birth, making fried chicken, Bad Dad, the works) romps in the underbelly of the American dream hearkening  movies by David Lynch, John Waters. “Blacktop” recounts a road trip in which an innocent visitor drops in the wacky world of incestuous siblings. The story is all conveyed, via monologue, in something like breakneck speed by Fleck, who is an acknowledged master of this genre of performance art. He’s beyond at home in his material, he exists in it, as he swaps between wigs, squeeky character voices and animal grunts, groans, yips and moans. 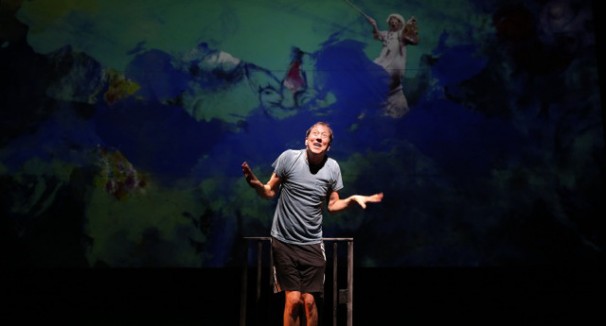 Just when you find yourself thinking that Fleck, as he flits amongst his myriad hilarious stage props making hay of the most basic of set design and wonderfully contrived videos, is a total madman and thus dismissable, a tech glitch occurs in the performance. And there he is, exposed, the Wizard of Oz with the curtain pulled back, the producer/director/actor, deep into playing three roles (and a few animals) and, dang, he’s lost his video projection. Surfacing from the madness in a nanosecond, he breaks the fourth wall and addresses the audience with a brief apology for the screw-up. A quick fix, in the dark, in the form of a production assistant has Fleck again immersed in his nutty drama. And you’re watching this and you’re thinking, “Damn, that was good.”