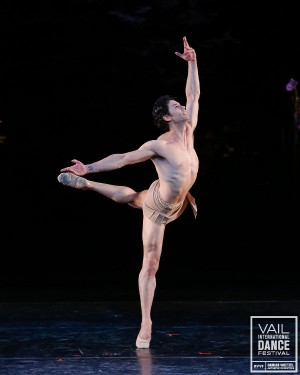 In this case, it’s no huge punishment. We are talking about two of the loveliest, most talented — and beefiest — guys in ballet today.

Pictured at left, Herman Cornejo, who commenced the “Diana & Acteon” pas de deux Saturday night at the Vail International Dance Festival by cannon-balling sideways from the stage wing, about eight feet in the air.

After that impressive start, the Argentinean-born American Ballet Theatre principal dancer, clad in a flesh-toned loincloth, got down to business, giving a fabulous outré performance of the warhorse pas de deux, with stylish partnering of ballerina Isabella Boylston. The Russian novelty number comes to us via Rudolf Nureyev’s re-staging of ballet pedagogue Agrippina Vagonova’s choreography. 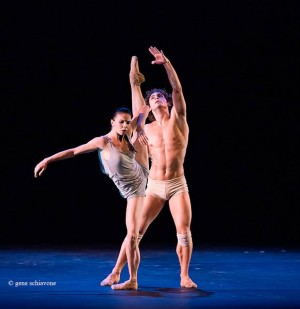 Meanwhile, at Segerstrom Center for the Arts in proper Orange County, which is breaking stereotypes by promulgating more and more adventurous art, Ivan Vasiliev, too, pranced, er, danced in his skivvies.

Vasiliev arrived to this level of disrobement by on-stage stripping, rather adorably, from full wedding-waistcoat, in choreographer Arthur Pita’s initially promising but ultimately disappointing dance-drama for Vasiliev and Natalia Osipova, “Facada.”

This ballet, too, enjoyed a strong start with a forceful and hilarious comic turn for Vasiliev, who in spurning at the alter his charming bride-to-be (the winsome, slightly goofy Osipova) ran screaming from the hall. (An enactment of real-life drama? as the two dancers’ long engagement recently broke off.) But Pita squandered Vasiliev’s talent, producing no real return on the moment, and the ballet dissipated into a more predictable (and dismal) direction, violence. A knife, a choke, then a dance on the grave. The entire evening, “Solo for Two,” packaged by Ardani Artists to also include works by Sidi Larbi Cherkaoui and Ohad Naharin, was a choreographic letdown. For this dance-fantasizer, it was a depressing sight seeing a great ballet couple take an evening’s end curtain call in their underwear.