The jazz strata of Ave Pildas 1 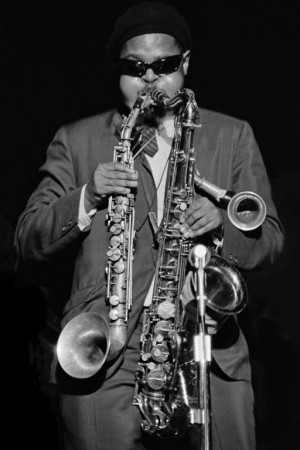 If you receive photographer Ave Pildas’s weekly e-blasts, you know the prolific nature of his work. His street snaps can be quirky, straightforward, unpredictable, ironic, reverent, whimsical, iconic, or just plain fun. He has an eye for the beautiful and the surreal but the transmissions often time to current events or seasonal observances. They show all kinds of people in all kinds of places, doing all kinds of things. Pildas the world traveler may show you a venerable old Pasadena church building—bisected and jacked-up on wheels; Vietnamese nuns in front of a banner boasting “beer and bbq”; red, white and blue-flocked Christmas trees in West Hollywood; or an amateur painter at his easel–in the Prado.

The Cincinnati native came West in 1971 to work as an art director at Capitol Records. While here, he resumed freelance photography, something he began pursuing as a college student-turned-graphic design professional in the early ’60s. Highbrow, slick magazines like Camera, photographic, ZOOM, and PHOTO featured his work. Pildas also published a nifty little book, Art Deco Los Angeles (Harper & Rowe, 1977), that documented some of the remaining architectural landmarks around SoCal—like the finely-wrought details of the magisterial Bullocks Wilshire, now an office building. 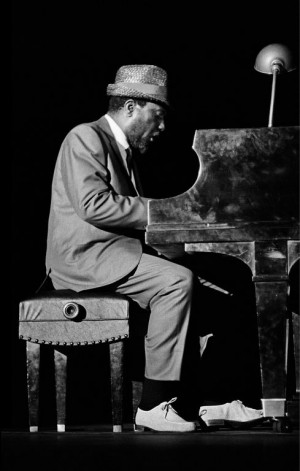 His subsequent years of teaching saw Pildas become department chairman of design at the Otis College of Design, where he holds emeritus status.

The Perfect Exposure Gallery on Sixth Street in Koreatown has opened a new show of his prints: “Ave Pildas: Then/Now.” They bifurcate into street images and an earlier body of work: his photos of jazz musicians.

As a young man, from 1962-64, Pildas shot the players in clubs, after-hours spots, concert halls, nameless bottle rooms and festivals in Cincinnati and Pittsburgh. Though he sold the occasional pic to Down Beat magazine (for fifteen dollars a throw), this potent little body of work is virtually unknown to the jazz public. Supplying shots to club owners and the musicians themselves proved more lucrative for Pildas.

Call those cities a “secondary jazz market” if you will, but his subjects include top players like saxophonists John Coltrane, Paul Desmond, James Moody and Gerry Mulligan; pianists Thelonious Monk and Dave Brubeck. 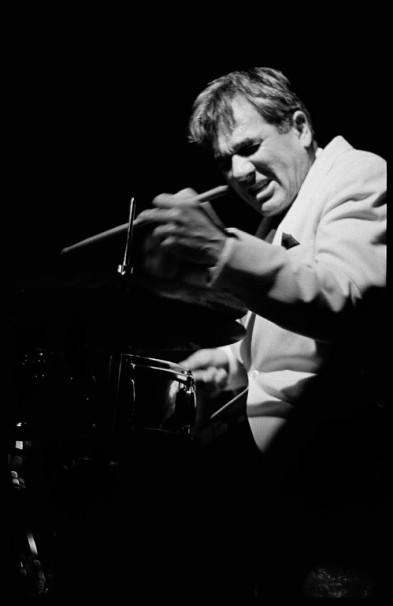 ildas shot in places like the dank Babe Baker’s, where freshly-grown Kentucky pot was discreetly sold outside; the famous Crawford Grill in Pittsburgh’s Hill District, where hookers lined the bar and Pirates right fielder Roberto Clemente had his own special seat. Or the Hurricane Bar, where singers had to be careful not to fall off the tiny stage behind the bar. Pildas was good friends with the band co-led by trombonist Al Grey and tenor saxophonist Billy Mitchell, one of the durable touring units of the period.

The great jazz photographers all have their signature look. For Herman Leonard, it was the detail revealed by the strobe flash at New York’s Royal Roost, while William Claxton often engineered something fun and uniquely West Coast. Pildas was blissfully unaware of other jazz photographers, looking instead to Cartier-Bresson, Robert Frank and Irving Penn. Though it was an avocation, the Pildas jazz images have their own visual thumbprint too. His subjects are in the moment of playing—each in a black strata where nothing else exists. Their concentration, communication and struggles are with an instrument or a microphone. 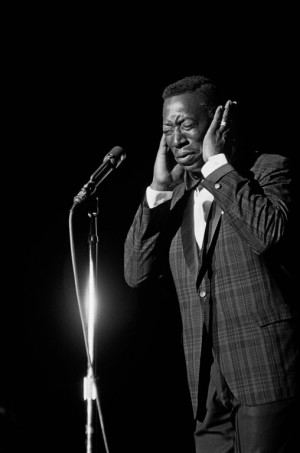 Singer Joe Williams, known for his reserved demeanor, is caught in a moment that looks like emotionally excruciating. James Moody’s glasses make him look extra-terrestrial. Young Ronnie Cuber is framed through the soft-focus plumbing of his baritone saxophone. Gerry Mulligan recoils from a particularly demanding passage on his baritone. Nina Simone looks like a Nubian Queen in profile. Gene Krupa—some 30 years after his matinee idol phase, attacks his drums with undimmed ardor. Roland Kirk’s many reed instruments attach to his body like the harpoons sticking out of Moby Dick. Dave Brubeck labors mightily to bring the piano around to his point of view.

Not to shortchange the curious and delightful street scenes in the show, but Pildas’s jazz images are a postcard from an old love—mailed many years ago and lost til now, but with the residuals of the heart still intact.

One comment on “The jazz strata of Ave Pildas”