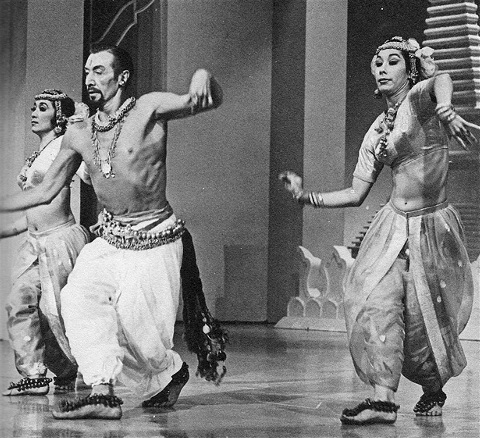 We have been delighted to be in touch with fellow Jack Cole fantatic Namita Kapoor, a talented American dancer/choreographer and graphic designer who has found cultural connection in an odd (but awesome) phenomenon of nightclub culture from the late 1930s – 1950s. That is, Jack Cole’s mash-up of classical Indian dance with American jazz rhythms. Dare we add, the original dance mash-up?

So we are happy to read in the San Francisco Examiner that Namita will present her dance tribute to Cole’s marvelous dance speciality in a mixed-bill performance at San Francisco’s ODC theater.

Quoting directly from the Examiner article:

“Growing up in a suburban and predominantly white neighborhood, I didn’t have a lot of access to classical Indian dance or culture,” says Kapoor. “I was exposed to primarily Western dance and art. My entire life has been finding the blend — the relationship between these two, as a means of understanding my own identity.”

In mining her roots, Kapoor made an astonishing discovery. She says, “Jazz dance began with Jack Cole, a former Denishawn dancer who studied classical South Indian bharatanatyam dance, and in 1934 he performed bharatanatyam dance to jazz music at the Rainbow Room in Manhattan. People were so excited about it and called it Hindu swing. That’s the name of my show and that’s the premise of what I’m presenting.”