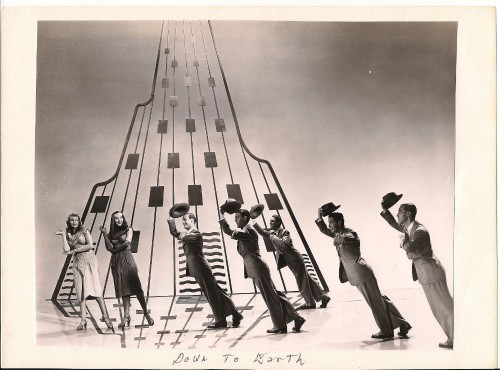 A lost Jack Cole dance sequence from DOWN TO EARTH (Columbia, 1947). [click on the photo for detail.]

Called the “New York number,” it used to be part of the larger “People Have More Fun Than Anyone,” number before it was cut from the film. It was absolutely common in Cole’s Hollywood career that his creative labor would hit the cutting room floor, a more notorious “gone missing” number is his homage to Paris from “Gentlemen Prefer Blondes.”

Rita Hayworth and Virginia Hunter pose at left. The men’s shoes were nailed to the floor, dancer/choreographer Alex Romero told arts·meme friend Larry Billman (Romero is in the number, second from right). We can only imagine what kind of fun Jack Cole had creating dance activity for shoes nailed “down to earth.” And yes, I believe the visual syncing with the film’s title was intended — because Cole was a genius and he rolled like that. Nothing was unintentional.

What matters here — a lot — is that this photo dates to the first inklings of the California-driven mid-century-modern design. Very early in fact, 1947. Get it design fans? A choreographer perpetuated this aesthetic.

Yet more visual evidence that Cole was an under appreciated genius of not just dance but American culture at large.

Photo courtesy of Larry Billman, The Academy of Dance on Film.