Jack Cole, the camera’s eye, and the space of the soundstage 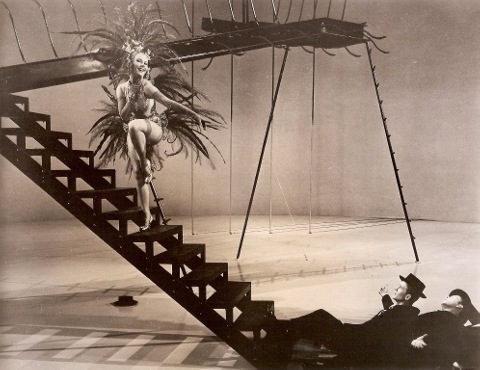 In the photo above from “The I Don’t Care Girl,” Cole inserts a staircase so that the dancer (Mitzi Gaynor, on steps) floats (as in space) at mid-frame. Cole layers men on the ground, populating the bottom edge of the frame. He regularly dispatched men, scrambling, across the frame bottom. He even extended the viewer’s eye beyond his frame; poking in and out of it. He had a keen eye for “decorating” this rectangle.

Professor-Emerita Emma Lewis Thomas, who knew Jack Cole as a fellow UCLA dance instructor, wrote an email, “Cole was adept at using SPACE captured by the camera…he was able to push perspective further than any choreographer of his day, without 3-D glasses.”

Emma-Lew put into words what I respond to so viscerally when I watch Cole’s dance sequences.

Jack Cole aggressively advanced the art of choreography on film. This he did, I believe by instinct — that is, sheer talent — and not by design. Astaire’s great breakthrough was the medium shot which includes the dancer’s full body in every frame. Gene Kelly adhered to this paradigm. But Cole took off the gloves, ripping into his canvas — cinema’s rectangle. A creature of the atomic age, he fissured it like an A-bomb, a Pollack painting. He splintered the screen, etching it with set design, costume, and choreography. Into a placid box he dappled dance activity from all sides. No space, or level, in the frame went unused by Cole.

Cole yanks the viewer’s eye away from the initial orientation (watching three women perform on a stage) to the opposite perspective, i.e., the focus flips — we now look upon the audience from the dancers’ perspective. Stage lights glare in our eyes. The camera then relocates backstage, and we peer on the dancing women from the vantage point of the wing. Finally, the women, exiting the stage, physically burst into the camera’s space (backstage). It’s a dazzling, surreal, off-balance tour — much like what it is to perform.

Cole goes farther. He includes a mirror in his set decoration; one hangs on the theater wall. There you see the performance reflected. When you consider that “Les Girls” was inspired by Rashomon, well, you begin to suss what a genius Jack Cole was. Has any single film critic ever even noticed this sequence?

Also in “Ladies in Waiting”:

Every element gets an A+. Every dance instinct is smart and correct.

Finally, to my eye, “Ladies in Waiting” prefigured Bob Fosse’s circling camera work in “Cabaret,” although it pre-dates “Cabaret” by 15 years. Fosse won an Academy Award for direction of “Cabaret” in 1973. Jack Cole died, by and large forgotten, in 1974. A principle lesson, lest we forget, that there’s no business like show business.

photo: courtesy larry billman, the academy of dance on film