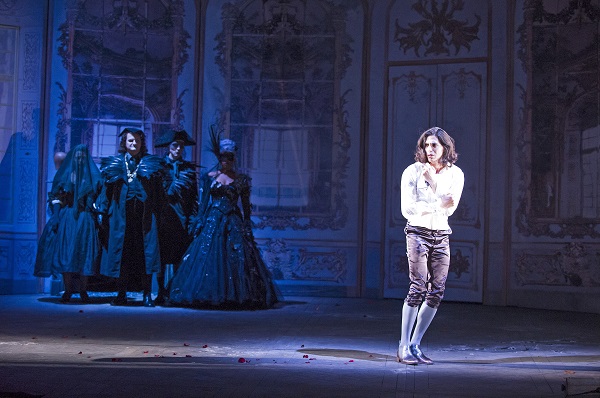 Haven’t heard of La Finta? Not to worry, few people have. Written when the composer was but 18 years old and very (very) rarely performed, the anonymous text is primarily to blame: The Podesta (Mayor) is in love with his new gardener Sadrina, which is too bad for the servant Serpetta who more than fancies the Mayor. Only Sadrina is really the noble Violante who’s fleeing Count Belfiore, the lover who stabbed her and left her for dead out of jealousy (though she still loves him and, we eventually we learn, he her); and Nardo, Violante’s servant in disguise, yearns for Serpetta. The Mayor’s niece Arminda is becoming engaged to Belfiore but really wants the gothically morose Ramiro (and he her, if he could love, but he can’t)… 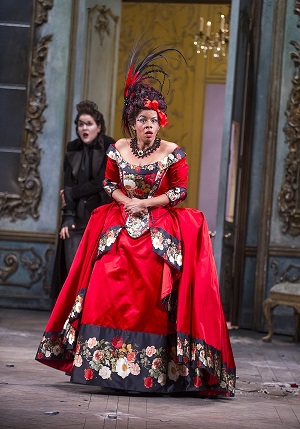 Nowhere near da Ponte (Figaro, Cosi, and Don Giovanni librettist), then in fact well-nigh unfathomable on the page; but in this production, commissioned by the Mozart-friendly Glyndebourne Opera in celebration of its 80th anniversary and via the nimbly elegant direction of Frederic Wake-Walker, almost lucid: Six young souls plus one would-be manipulator running from, yearning for, striking poses in regards to love — a dangerous game with few winners. La Finta – roughly “the feigned” — refers to Sadrina/Violante but all involved could be described as finti (if there is such a word).

The masquing (sometimes literal), the sentiment and lust transgressing caste boundaries is familiar territory in tales of this period; and without the narrative clarity, the soignée sophistications that came from later collaborations, as the first act unfolded I couldn’t help but imagine the roiling emotions of a young Wolfgang Amadeus who’d been witness to and likely plaything in all kinds of courtly drama in formative years as servant/entertainer. The essential claustrophobia and alienations of such a life is implied by the paradox that until the very end no garden is ever seen with the vast majority of the action taking place within the airy but often hermetically sealed confines of a Baroque garden folie (evocatively lit by Lucy Carter). Within this space the seven characters in search of affection strike poses reminiscent of porcelain figurines and any number of paintings from the period or whirl about in a literal ronde, soliloquizing their angst and yearnings but seldom taking, seemingly incapable of taking useful steps to resolve them. 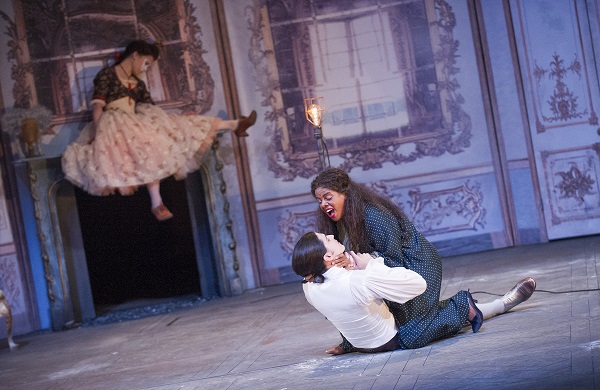 Essentially simple and young and not da Ponte, but the music most distinctively Mozart. Though quickly penned when he was only 18, La Finta was Opera no.9 for this preternatural genius, and one can just see dear old Salieri writhing with jealousy in his Viennese grave as it champagne-bubbled with beauty and ideas, clearly pointing to more incandescent glories to come, performed with expert brio by the Orchestra of the Age of Enlightenment under the baton of Glyndebourne’s new Music Director Robin Ticciati. 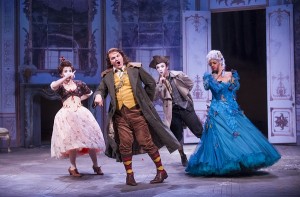 Candace Allen is the author of Soul Music The Pulse of Race and Music. She lives in London.