May
31
2014
Filmbette davis divas gena rowlands strangers: the story of a mother and daughter 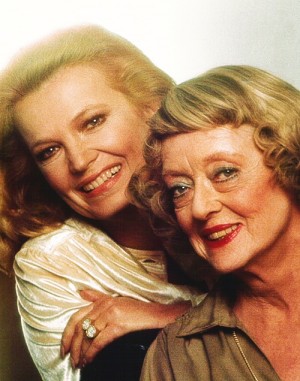 So incredible, Wednesday evening, to see the great Gena Rowlands in person, interviewed by film critic Steven Farber after a screening of her historic tour de force performance in “A Woman Under the Influence.”

As part of a long conversation, Rowlands spoke with great warmth about her memories of Bette Davis, with whom she co-starred in “Strangers: The Story of a Mother and Daughter” (1979).

“I loved Bette Davis. She was very funny; she had a cruel sense of humor.

“When I grew up, all the women [in the movies] were very obedient, pleasant, and had nice manners. Except it wasn’t so with Bette. Her very independence meant that she would lack a fear of offending. I remember on that movie we did together, I played her daughter. She would get really riled. She was really on the case of the cinematographer, who was one of the nicest people. She came out of the dailies and asked me, ‘Did you see my lips?’ She said, ‘I have on pink lipstick.’ I said, ‘It doesn’t seem so pink to me.’ (She wore it every day.)

“I said I wasn’t paying much attention. She said, ‘Well you better pay attention. Because YOU’RE NO SPRING CHICKEN EITHER.'”