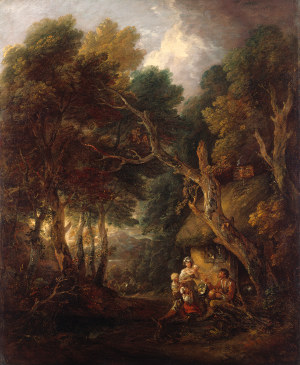 At right, “A Peasant Smoking at a Cottage Door,” dating from 1788 by the English landscape and portrait master Thomas Gainsborough. The work is on extended loan to San Diego’s Timken Museum of Art from UCLA’s Hammer Museum.

“A Peasant Smoking” offers the tranquil vision of peasants in a bucolic English countryside setting.

The gracious Gainsborough also sparked an unusual design competition in which eight graduate students from the UCLA School of Theater, Film and Television’s David C. Copley Center for the Study of Costume Design were invited to create fanciful costumes inspired by the painting.

The idyllic image kindled a lot of fire; design submissions on view here. 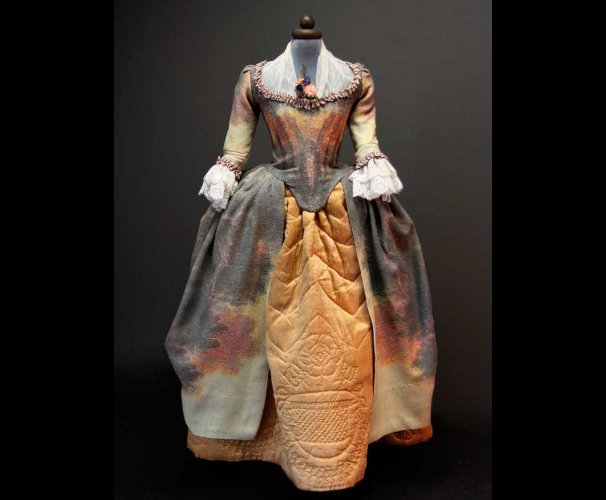 Copley Center founding director Deborah Nadoolman Landis says, “Our partnership with the Timken Museum on The Art of Fashion is a brilliant way to construct a creative, unique and truly interdisciplinary educational opportunity for our UCLA students,”

Designer Zandra Rhodes, among others, will judge the entries, with winners announced at a Feb 8 award ceremony at the museum, which is located in San Diego’s historic Balboa Park. The Gainsborough graces “Object Lessons: Gainsborough, Corot, and the Landscape of Nostalgia,” at the Timken through April 6.

All but the winning costumes will be auctioned during the event for the benefit of the Timken and the UCLA School of Theater, Film and Television Design Fund. Every woman needs one of these tremendous dresses in her wardrobe!