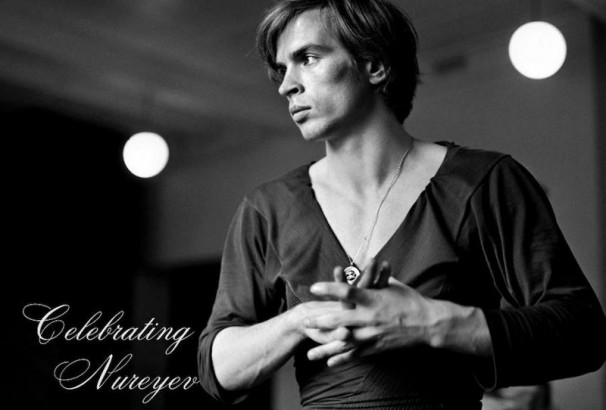 The beautiful and moving documentary, La Passion Noureev, a labor of love by Fabrice Herrault, a filmmaker who is also a respected New York City dance instructor and himself the product of the French ballet academy, will have its American premiere in Los Angeles on Thursday December 5, 2013.

The film was previously screened in Paris.

The exclusive fundraising event (click here for tickets) will take place at the state-of-the-art UTA screening room in Beverly Hills. It will feature champagne, caviar, Herrault’s gorgeous “tone poem” of a movie, and a probing conversation about the art and impact of the Soviet Union’s first and greatest exiled danseur noble. (I will be honored to lead this discussion.) 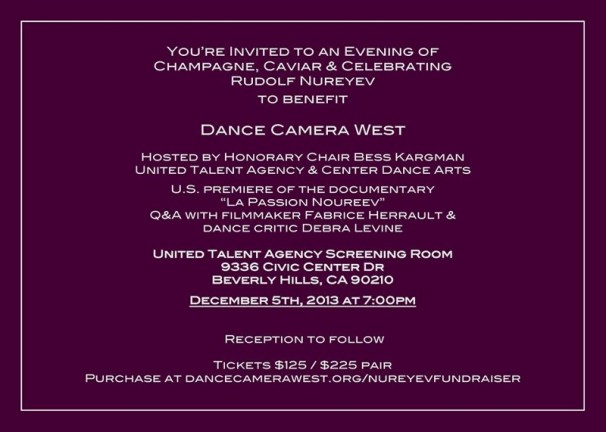 To call Rudolf Nureyev “influential” highlights the inadequacy of any single adjective to describe his outsized twentieth century life. Just one example: throughout Julie Kavanaugh’s biography, “Nureyev, the Life,” appear quotes from Mikhail Baryshnikov (the two men shared the same brilliant ballet  instructor, Alexander Pushkin). Does Misha  waxing about Rudik put into context what a game-changing influence Nureyev had on male dancers who followed? It should.

His imbuing of adagio movement with catlike sensitivity and exquisite timing; his explosive jumps and turns; his high (Tatar) cheekbones accenting a sensual face; his startling, shapely legs; and his do-or-die on-stage ethos raised the bar not just for men but for women in classical ballet.

The film Herrault has conjured — it will also screen next February at Film Society of Lincoln Center’s Dance on Camera festival — is an unabashed love letter to an uncompromising dancer’s art. It does not take on Nureyev’s personal life; this Herrault has tastefully left to others. What he has assembled, in great part from previously unseen found-footage, includes clips of blissfully long duration, among them home movies captured by (god bless ’em) rogue filmmakers whirring Super-8s from balconies and opera boxes. Much if not all of it is breathtaking, splendid, a beautiful and respectful glimpse at Nureyev both onstage and off.

Come celebrate an artist who prematurely departed planet Earth twenty years ago, in 1993. Please join us on the fifth.