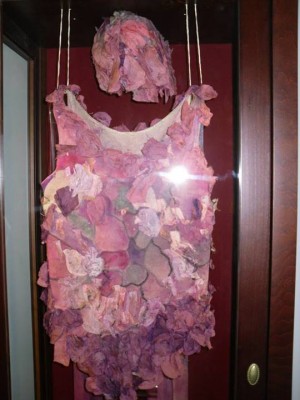 For our Thanksgiving post, no turkeys; instead, a spectre; a sixties-pink spectre of the rose.

The precious togs at right were worn by Vaslav Nijinsky in the infamous Ballets Russes production of the Michel Fokine ballet circa 1911. Now they hang on display at the Vaganova Ballet Academy Museum.

They come to arts·meme courtesy of Lorin Johnson, who snapped this photo in St. Petersburg where the exhibit he co-curated, “Russian Los Angeles,” has just opened at the Russian State Museum of Theatre and Music.

The vivid color of costume designed by Leon Bakst costume comes as a revelation — a real jolt.

Black-and-white photos – iconic images – of Nijinsky dressed for ‘Le Spectre,’ do not remotely suggest the dusky shade of pink that Bakst employed in this “flower-sprung-to-life” dance gear.

Nijinsky’s silk elastic costume was designed by Léon Bakst. The costume was covered with silk rose petals. Nijinsky was stitched into the costume for every show. After every show, the wardrobe mistress would touch up the petals with her curling iron. Nijinsky’s make-up was an important part of the costume design. …Ostwald writes that Nijinsky’s costume was like a ballerina’s. Sometimes, petals would become loose and fall to the stage. Nijinsky’s servant Vasili would collect the petals and sell them as souvenirs. It was said that he built a large house called Le Château du Spectre de la Rose with the profits from the sale of the petals. 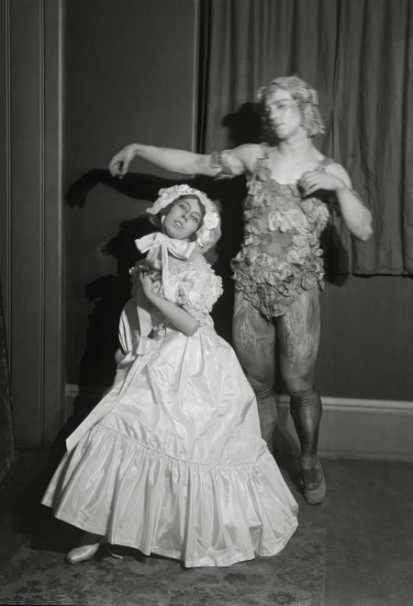 At right, a most jarring image of Nijinsky wearing the costume in a photo taken by the German-born British photographer E.O. Hoppe.

Hoppe scrambled to capture Nijinsky and his sister Bronslava in an improvisational backstage photo shoot.

Now, why wouldn’t  “Spectre”‘s costume be visually alluring? Diaghilev was known for massive contributions in the area of the visual arts, as well as in choreography. And the ballet’s male role is called “the Rose,” So it makes perfect sense that the costume be rose-pink.