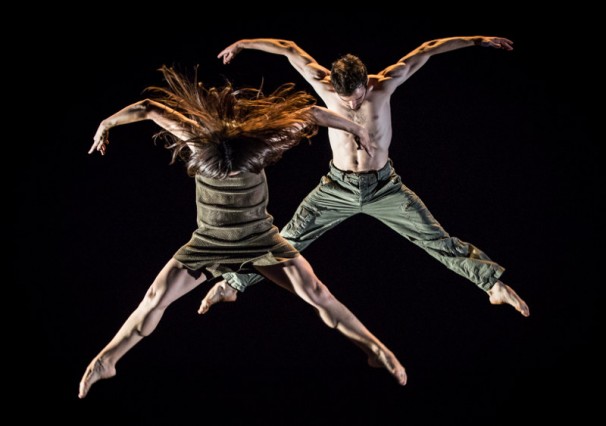 It’s not possible — without being extremely personal — to describe what took place when the handsome and effervescent local dance troupe BODYTRAFFIC took to Santa Monica’s Broad Stage last night.

Because this happening company isn’t just a triumph for itself—of course, it’s that too—but for an entire community that has waited for lightening to strike, and for Los Angeles to spawn its own high-caliber dance ‘home team.’ That moment undeniably arrived when the ‘Traffickers, coming off a heavy-hitting roster of engagements—New York’s Joyce Theater, Jacob’s Pillow Dance Festival, and lately, passing muster in America’s “second” dance town, dancing at ODC in San Francisco—brought it all back home.

Performing that often, and for such sophisticated dance audiences, makes you better. And improvement was patently on view, particularly in the company’s male contingent—big upgrades from Miguel Perez, always handsome but newly supple; Guzman Rosado, stretching beyond his frame and bringing new on-stage awareness; and Andrew Wojtal, previously tentative but now hilarious soloing in “All of Me” from Richard Siegal’s “o2Joy.” (It’s hard to lip sync spotlessly and dance at the same time!) It was emotional indeed to see BODYTRAFFIC co-artistic directors Tina Finkelman Berkett and Lillian Barbeito together on stage: Berkett, really a great dancer, carried the evening, flashing the kind of spontaneous smile you don’t learn in dance class; and Barbeito, who will retire as a dancer after this engagement, fragile, more delicate, yet forceful and resolute.

Also in the house, two of the evening’s choreographers—Barak Marshall and Kyle Abraham—and what a pair. Marshall, he of corkscrewed hair, took the stage (though jetlagged from a London flight) for a cameo role in his wild and wacky “And at midnight, the green bride floated through the village square…” BODYTRAFFIC has been steeped in this dance-drama since its Joyce Theater premiere a year ago. Now they own it, in a dance kind of way.

Who could replicate Marshall’s supremely original “green bride”? The pageant of shtetl-shenanigans features not only an onslaught of witty dance invention set to marvelous, dusty old Yiddish songs, but it’s full of ideas. Some are disturbing, like the sneering sexual aggression conveyed in “old world” recipes (“a pigeon is a stupid animal”), indicating a deeply engrained male chauvinism of Eastern European culture a mere three generations back. Marshall’s skillful interpolation of spoken word, dance and ideas and the ‘Traffickers fulsome performance of “green bride,” for this viewer, lifted the lid off the Broad and for 35 minutes the entire room spun ’round the Santa Monica skies, as in a Chagall painting. 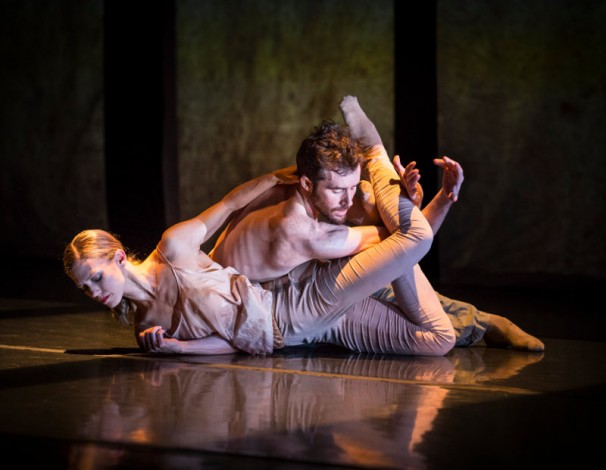 Back to earth we returned for the event of the evening: the premiere of “Kollide,” a neatly titled new work by Kyle Abraham, who was recently named as a MacArthur Foundation “genius.” “Kollide’’s muted palette of browns and pale pink spools before a five-paneled Japanese-style backdrop by Dan Scully to a string-dominated score by Hildur Guonadottir, and Valgeir Sigurdsson.

A pair of duets—women in casual wear (a mini dress, trousers), men shirtless in cargo pants—opens “Kollide.” The dance reveals itself slowly, taking time to ramp up to music that is not very distinguished. There is a beige quality to “Kollide,” not just in its palette but in its dance tonality, lovely as it is, and dotted as it is with Abraham’s hipster-fillips but relocated in a somber setting. On view are the shoulder shrugs and rolls, the Merce Cunningham diagonal pointing arms (in contrast to Abraham’s loose, long and drapey ones) and quivering torso undulations. There’s a lovely duet for Barbeito and Rosado, the latter bringing an alert and manly presence.

“Kollide,” though an action verb, as a dance ports a solemnity we’ve not seen before from Abraham. Could it be the difficult world infiltrating this thoughtful choreographer’s aesthetic? As the sound score drones, “Kollide” seems cast adrift; then Barbeito, a blonde Raggedy-Anne in pink and white, fills the stage with her presence to swelling music. Images of dissipation, decay and collapse come on view. There’s a silent bit to just a string bass. “Kollide,” mysterious and engaging but as a whole not fully realized, ends with the provocative vision of downward-flowing salt (dried tears?), or sand (the sands of time), video-projected behind the dancers.

An intriguing new direction for Abraham.