Review: BodyTraffic at the Gindi 1 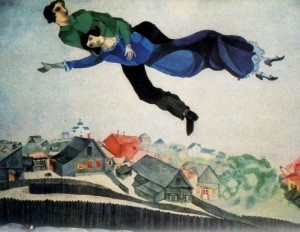 Did you feel the earthquake that rocked the top of the 405 Freeway near Mulholland Drive Thursday night? Oh, you missed it? It was the tremor of excitement when BodyTraffic, Los Angeles’s newest and best entry into the contemporary dance universe, shook the stage of the University of Judaism’s Gindi Auditorium. The ten-member troupe, co-directed by Lillian Barbeito and Tina Finkelman Berkett, delivered beautiful dancing, across the board, in three diverse works of contemporary choreography.

Later this week the Traffickers (okay, the Body’ites) take their show on the road to New York for a two-night run at the Joyce Theater’s Gotham Dance Festival. Two pieces, created on commission, will have their formal premieres in New York. But Thursday night, in nothing less than a joyous evening for local dance lovers, Los Angeles got a sneak preview.

Oy yoi yoi, Barak Marshall! Your wicked and marvelous “And at Midnight, the Green Bride Floated Through the Village Square” has an 11-word title. It just ate half a paragraph of your review. In “Green Bride,” the maven of manic movement tours us through his Chagall-inspired imagining of shtetl life-from-hell. It’s a glimpse into rural coupling and marriage rites. Though culled from another century, continuities abound. The women, hair tucked in buns and donning simple frocks, primp and prepare, then pine and yearn for love. In return, they’re spurned if not brutalized by insensitive male counterparts. Ultimately the ladies are dragged like chattel. No one lives happily ever after.

How the BodyTraffic crew nails Marshall’s pounding, gesture-driven choreography with such pristine clarity (it passes faster than the eye can take it in) is anyone’s guess. Watching it scroll is a happening. The company’s excellent men swap between relentlessly high-energy, tweeky (at worst, fussy) movement into funny spoken-word duets. Country-cooking recipes for pigeon, lamb and fish become vehicles for sexual aggression. The ladies cluster together and whimper into their hankies. All of this expressive acting the company delivers rather faultlessly. Finkelman Berkett, a splendid dancer, a brown-eyed beauty, adds oomph. Marshall’s real-life mamma mia, the exceptionally special actress-dancer Margalit Oved graces with her presence; actually she’s outrageous, imparting a Ladino-Arabic element into the Eastern European shtetl setting. 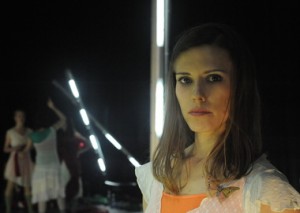 The program also includes Stijn Celis’s well-named quartet “Fragile Dwellings” delivered with majesty by lead dancer Lillian Barbeito, queenly in a white costume and reigning over the stage with her spidery stretched limbs. Viewed at closer range than last year’s performance at Cal State Los Angeles, this work packs a depth of connection and even profundity as its four performers converse on stage with their bodies. What dance is supposed to be.

Euro-choreographer Richard Siegal’s “O2Joy,” to a mélange of jazz, buffers the evening with a fun, if derivative, series of dance interpretations of great American music. The songs from Billie Holiday, Glenn Miller orchestra, and Oscar Peterson do not receive significant new interpretation in Siegal’s hands. But the ballet-based, hip-hop infused dance parade passes pleasantly enough. Andrew Wojtal excels as a lip-syncing red-haired and bearded version of Ella Fitzgerald backed by a girly duo of Barbeito and Finkelman Berkett.