We’re very excited to attend a celebration, hosted by Hollywood Heritage, of the films and stars of Republic Pictures.

In addition, Karla Buhlman from the Gene Autry Foundation will discuss the singing cowboy’s unique relationship with the studio and its head, Herbert J. Yates. 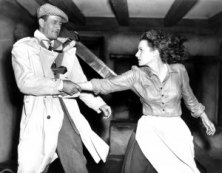 Bryan Cooper, president of Hollywood Heritage who is personally organizing the event, chatted today with arts·meme. Said Bryan: “We’ll have eight celebrities in attendance who worked at Republic back in the day, describing their experiences and seeing clips. It will take us back so we can re-live the glory of a studio that has largely been forgotten.”

He continued: “Most people remember it for westerns, but there are huge, iconic movies that were made at Republic. Like Orson Welles’ “Macbeth,” and John Ford’s “The Quiet Man.” And of course lots of John Wayne movies like “Rio Grande.” Republic now owns the rights for “It’s a Wonderful Life”; there are many movies in every one’s psyche associated with Republic, and we’re trying to give it some due recognition.”

thanks, doc macro, for the photo