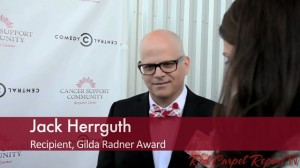 We were extremely touched by a wonderful acceptance speech from Comedy Central’s Jack Herrguth upon receiving a GILDA Award from the Cancer Support Community – Benjamin Center last Saturday night.

Founded in 1982 by Doctor Harold Benjamin, the CSC was built upon the principle that no one should face cancer alone. Offering support groups, mind & body classes, educational and nutritional workshops, social activities, and individual counseling sessions – all free of charge. For 31 years, the CSC is home to cancer patients and survivors alike. The fun event held at the Museum of Flying on the grounds of the Santa Monica Airport also offered a gallery showcase of fine art. Conguero Louie Cruz Beltran and his wonderful orchestra rocked the party with Latin Jazz.

In his speech, Herrguth, a cancer survivor, graciously ruminated on the vivacious Radner who was cut down at young age by ovarian cancer. Radner had been an early supporter of the CSC and the annual award is in her honor. 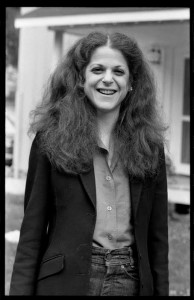 When I first received the call … that I was being honored with this award – I thought there had been some mistake. I mean, me? Gilda Radner? She was a comedy icon who conquered TV, Broadway and the movies. And me? Well, I’m wearing this red sport coat.

But the more I thought about it, I realized Gilda and I had things in common. We both like to make people laugh, we both had cancer … and we’re both women.

I first saw Gilda on Saturday Night Live when I was a little kid. And she quickly became one of my comedy heroes. Her characters were part of the cultural zeitgeist: Roseanna Roseannadanna. Emily Litella. Lisa Loopner and Baba Wawa. I used to put on my mother’s wig and sunglasses and do impressions of all these characters, whether people wanted to hear them or not.

I remember hearing that Gilda was sick, diagnosed with ovarian cancer. As I kid I wasn’t sure what ovaries were, let alone cancer, but I knew it sounded bad. But what I didn’t know was this – Gilda would become my hero in another, unexpected way – in the way she battled cancer with courage, humility, and most importantly, with laughter.

Take it from me. It’s hard to laugh at cancer…

But cancer has taught me to embrace the beauty of life and all of its uncertainties.

Or, as Rosanne Roseannadanna said, “It just goes to show you. It’s always something.”