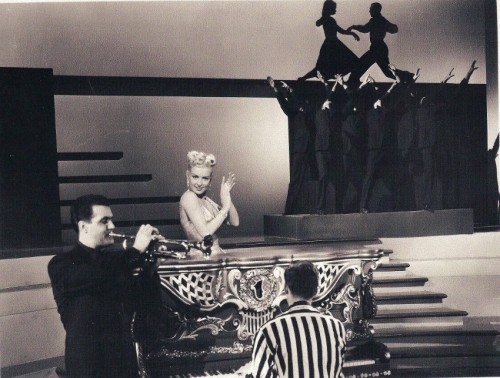 It’s a big honor to be recognized in the New York Times.

I am awfully proud to receive a shout-out (used to be called a “name mention”) from Dave Kehr, the highly respected film critic. In his weekly New York Times round-up of recently released DVDs, Kehr writes:

MEET ME AFTER THE SHOW The choreographer Jack Cole has been enjoying a revival lately, largely thanks to the efforts of the critic Debra Levine. This Betty Grable vehicle from 1951 (otherwise directed by Richard Sale) features some of his boldest, strangest Dalí-influenced work, including a couple of numbers that point directly to the hallucinatory “Diamonds Are a Girl’s Best Friend” in “Gentlemen Prefer Blondes.” But ghastly color reproduction renders this disc almost unwatchable. Gwen Verdon received her first screen billing as Grable’s partner in the wholly unbridled finale.

photo of betty grable from “meet me after the show” courtesy of larry billman, the academy of dance on film