A Rat-Packy night in L.A. — so much royalty, show biz and more. The memorabilia comes from arts·meme pal Larry Billman, founder of the Academy of Dance on Film. 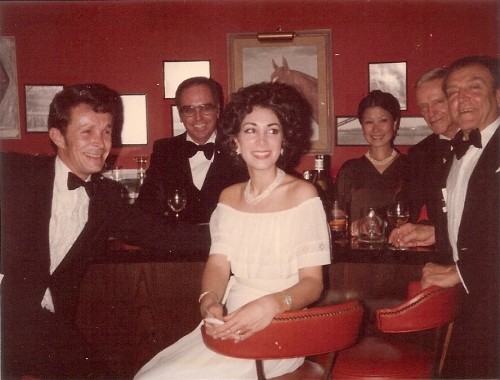 Remembers Billman: “We [Billman and his wife Tomo] were part of a circle that included Mary Tyler Moore, Grant Tinker, Betty White and Allen Ludden. Fred’s sister Adele was part of that group.

“The Shah’s [niece] was Hermes’ date. She went by the name of “Sherrie.” Hermes had a very long and deep friendship with the [Iranian] Royal Family.

“I love the fact that Fred’s bar was decorated with photos of his horses, rather than show biz connections,” writes Larry in an email. “No Emmys, etc. He did have one very ugly painting by Irving Berlin!” 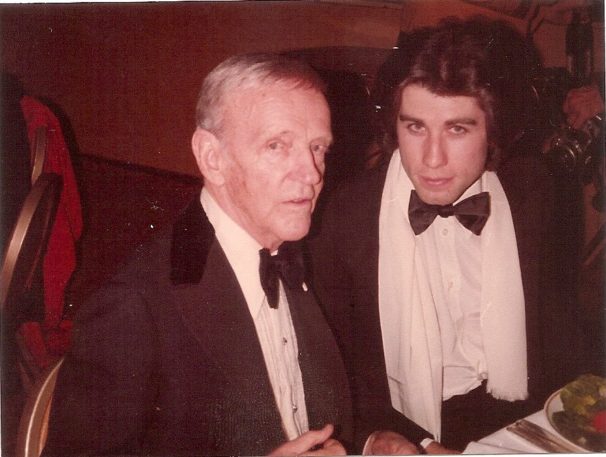 Billman explains: “Astaire invited Travolta to join his table after seeing “Saturday Night Fever.” Fred called him and said, ‘I’d love to meet you.’ He did that, as well, with Michael Jackson after he [MJ] did the moonwalk. Fred reached out to all the up-and-coming people.

“John didn’t [quite] know how to behave. It may have been his first time he wore a tux. And he’s wearing that scarf.

“This is a photo of a man in his golden age … sitting with a man who just struck gold.”

One comment on “A royal Hollywood evening with Astaire & Travolta”