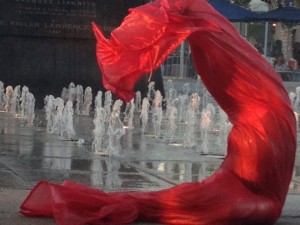 A marvelous event opened the annual Dance Camera West film festival Thursday evening. At dusk, we gathered ’round the Jacques Lipchitz “Peace on Earth” sculpture-fountain that anchors the plaza of the Los Angeles Music Center, one of our city’s rare pedestrian hobnobbing spots.

Suddenly a tall tube of ruby fabric mysteriously appeared and began to sway in the balmy air. 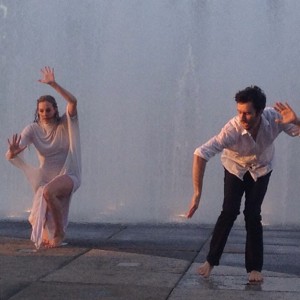 Los Angeles City Hall, capped by its tiered white beacon-top, stood erect in the background. The writhing tube, in its shape, echoed the Lipchitz sculpture — but sprung to life and gone stark-raving red, like a smear of lipstick oozed from its container.

It was dance maker Sarah Elgart’s fine execution of her Dance Camera West commission: to use choreography to augment a familiar locale and cause an audience to see with new eyes. 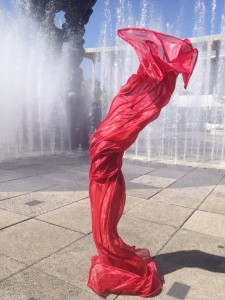 The site-specific showcase was a clever adjunct to DCW’s film offerings and supportive of under exposed dance makers in our community. It was the brainchild of dance agent Julie McDonald, who worked with DCW director Tonia Barber to bring the fountain fun to fruition.

At LACMA, choreographer Tony Testa lit the fuse on a romping group dance — six men, one lucky woman — dedicated to ‘Healing the Bay’ that exploded with strong dynamics at the top of the long corridor leading from Wilshire Boulevard on to the museum campus. 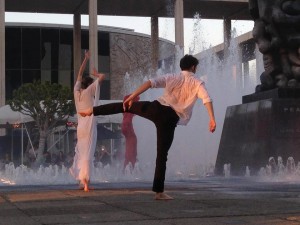 Further location-inspired works by Daniel Ezralow and Kitty McNamee rolled out at the Getty Museum. The Getty, of course, hosted, not a month ago, the mother of all site-specific dances: Trisha Brown’s Roof Piece dating from 1971. This rash of populist, plein air dancing in L.A. indicates dance makers rarin’ to go but unable to secure production in traditional theatrical outlets. I like the spunk — let’s dance anyway! We’re also reminded that along with this weekend’s creative quartet our community includes two long time, respected practitioners: site-specific experts Heidi Duckler and Stephen Koplowitz.

One comment on “Elgart’s aquatic adventure @ the Music Center”