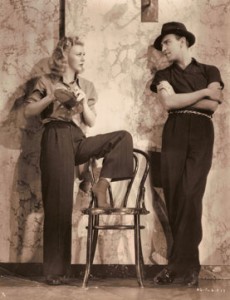 Growing up in Memphis as the son of Greek immigrants, Hermes Pan (1909–1990) copped dance steps from the family’s African-American household help.

The versatile dance director whose career encompassed nearly 100 films is the subject of Hermes Pan, The Man Who Danced with Fred Astaire.

Pan got his start at 14 in New York. A dance-crazed kid, he performed in amateur theatricals and speakeasies. Leaping to Los Angeles by 1930, he assisted on Flying Down to Rio (1933) and Astaire took a liking to him. Pan became the star’s most enduring creative partner and his lifelong friend.

Franceschina, a former Penn State theater professor, translates Pan’s enormous IMDB vitae, often ploddingly, into prose, touring through the creation of numbers like “The Piccolino” and “Cheek to Cheek,” from Top Hat (1935); “Bojangles of Harlem,” from Swingtime (1936); “Fun House,” from A Damsel in Distress (it garnered Pan an Academy Award for Dance Direction in 1937); and “Let’s Call the Whole Thing Off,” on roller skates, from Shall We Dance (1937).

A jump to 1963–64 finds Pan deeply entrenched in Hollywood, working on features like The Pink Panther, My Fair Lady, and Cleopatra.

Pan’s great skill, asserts Franceschina, lay in his dance-transmogrifications of mundane life situations. His vitality, work ethic, and ability to please both chorus girls and studio bosses cemented his career. Handsome and slender, a bizarre doppelganger for Astaire, Pan, a gay man, became an A-list party-goer, the frequent escort of Rita Hayworth. Read this book with YouTube videos by your side.

3 thoughts on “Book review: ‘Hermes Pan, The Man Who Danced with Fred Astaire’”