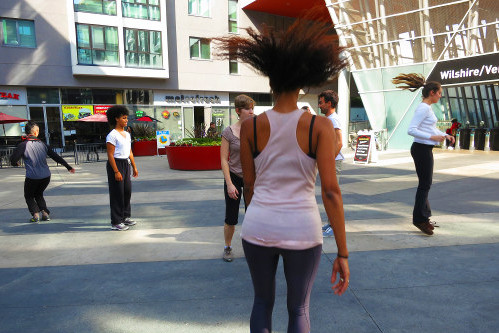 PausePlayPlayPrev|Next
We received an intriguing note from our friend Stephan Koplowitz, the Bessie-bearing, Guggenheim-garnering, Alpert-awarded choreographer, who is also Dean of Dance of the Sharon Disney Lund School of Dance at CalArts. Despite all of Steve’s awards and accolades he’s apparently being driven underground. And he seems to like it!

I’m proud to say that the LA Metro has granted us one of the first permits to perform inside their walls at all 14 metro stations on the Red Line. The negotiations were a performance unto itself … but the Metro is looking to the future. Of course, it’s ironic that after living in NYC for 23 years, it’s in LA that I’m making a work in the subways.

Conceived and created by Koplowitz, and produced by the Goethe-Institut Los Angeles, Stephan Koplowitz: Red Line Time is a time/space durational site-specific performance event. It is one of the first performance works sanctioned by the LA Metro to take place inside the metro system. Commissioned by the Goethe-Institut Los Angeles as part of the cultural program supporting the forthcoming conference on urbanism and modernism Re: Street The new science of streets and the form of the Future City, Stephan Koplowitz: Red Line Time spans all 14 stations of the LACMTA’s Red Line, (beginning at Union Station and continuing on to North Hollywood).

Audiences are asked to meet at the entrance of the Union Station Metro (east side), and purchase a $5.00 one day Metro “TAP” card, granting access to enter and exit the LA Metro Red Line for the performance duration. Audience members are invited to follow the show as it travels through the Red Line stations.