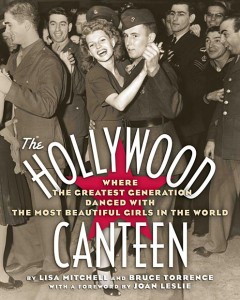 It was a touching and exceptional march back through time. Wednesday night at the historic American Legion Hall (Hollywood Post #43 ) just south of the Hollywood Bowl, we attended a marvelous event mixing military veterans and classic film buffs, members of Hollywood Heritage. After pledging allegiance to the American flag, the strange bedfellows shared a fun night of nostalgia, movie clips and a book talk. The two organizations, facing neighbors across Highland Avenue, co-sponsored the event.

The Hollywood Canteen, for three years (1942-45) a Los Angeles wartime institution on Cahuenga Avenue, was a nightclub offering food, dancing and entertainment for servicemen, most heading overseas. The converted barn-turned-nightspot was spearheaded by leftie actors John Garfield and Bette Davis, financed by MCA talent agency founder, Jules Stein, and powered by scads of nightly volunteers, doling out grub and swabbing the deck.

Those gathered Wednesday in the Legion Hall’s subterranean meeting room — many donned Legionnaire uniform with military-style envelope hats tipping jauntily, the other crop, film fans some in ‘forties costumes — enjoyed a presentation by co-authors Lisa Mitchell and Bruce Torrence of material from their new book The Hollywood Canteen. Listening, they munched on chocolate doughnuts, lemon bundt cake, grilled-cheese sandwiches and wine at $5.00 for a brimming portion.

One presentation excelled; it was that of the poised, articulate, and still beautiful actress Marsha Hunt. Hunt, an actress, political activist, and a great American, volunteered regularly at the Canteen. She addressed the room as follows:

The Hollywood Canteen is among my most prized memories. ‘How can I help you?’ I asked them. And they responded, “Would you give us Saturday night? We have the most guys then, and we cannot get the stars.”

It was a six-day work week in Hollywood then. The one and only night for actors to howl on their own was Saturday. It was the only night you could sleep in late the next day.

I was a war widow. So that was my stint. I spent every Saturday night of war at the Canteen.

I deserve no credit. It was the time of my life. The joy that that place brought to boys far from home. Only enlisted men, there were no officers admitted. That fell to my lot on Saturday night.

I was [also] captain to a team of ten hostesses. I had to be captain to ten pretty young things.

At 95, I am losing my sight. But I know how the words ‘Marsha Hunt’ look. I had to sign my name over and over and over. I must have signed 5,000 “Marsha Hunt”s by midnight; ever hour they shoved 1,000 [boys] out and 1,000 in [the Canteen]. I signed their matchbooks, their girls’ photos. I had so many encounters that were heartwarming; many of [these boys] were right off the farm.

My dignified father was a bus boy at the Canteen. My mother was spreading sandwiches, my sister was waiting tables. We were a family bent to be of service to the Canteen.

The Canteen is a memory that I will cherish. Giving our boys perhaps their last joy. May we pray that there will never be the need for another Hollywood Canteen.