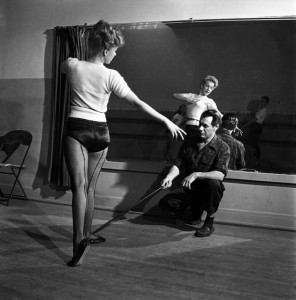 The photos are from a Life Magazine ‘A Day in the Life of a Starlet’ photo spread.

Writes Joshua Ireland, who shared the photos with arts·meme:

“I am working on a research project about Los Angeles dance teacher, Nico Charisse (1906-1970). My best friend in childhood was Marc Charisse, Nico’s son.

Nico was a dance teacher/coach in Hollywood from the mid 1930’s – early 1960’s. He never had a big success (although his first wife Cyd did!), but for much of that time he ran successful dance studios — well known in the LA dance and film world. 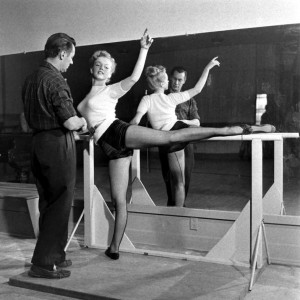 Nico’s ten brothers and sisters were in a dance troupe led by their mother, Calliope Charisse, first in France from 1918-23, and then, in 1923-24, Mme. Charisse and ten children toured the US in vaudeville.

Apart from Cyd, Nico’s most notable protege seems to have been Matt Mattox.”

Yes, Matt Mattox originally aspired to be a ballet dancer.

But Nico’s other significant pupil — perhaps due to her va-va-voom figure or was it her late start? — did not pursue a ballet career.

The photos are charming. Thank you, Joshua Ireland, for sharing.

2 thoughts on “Ballet bends-and-stretches for Marilyn”