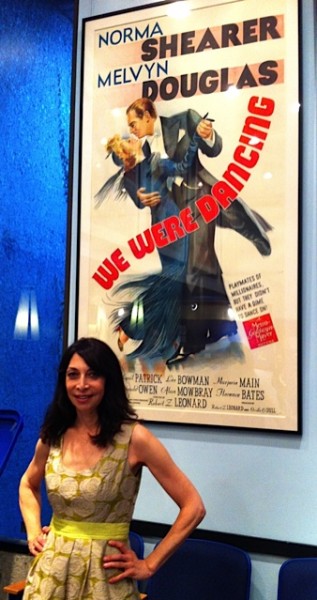 Does love of dance run in the family? If so, then actress/producer Illeana Douglas has traced her dance gene.

Illeana, a great film buff, is hosting Turner Classic Movies’ “Second Looks” programming on Friday nights of this month. Her marvelous, quirky film curation is catalogued in a wonderful essay written for TCM by Roger Fristoe.

Recently visiting a Barnsdall Gallery exhibition of dance-move posters — the pride of its collector, dance-on-film specialist Mike Kaplan — Illeana gravitated to the poster pictured at right.

Something instinctual drew her to it. Indeed it’s an image of her grandfather Melvyn Douglas cutting the rug with the early queen of MGM, Norma Shearer.

Now, this is delicious stuff, as, let’s be honest, we do not normally think of Norma Shearer and Melvyn Douglas as a dancing duo. But in those days film stars were so versatile. They sang, they danced (even a little); they spoke English with elocution, they did foreign accents, they flipped between comedy, musicals and drama. So, too, obviously, did Ileanna’s grandfather.

Writes Kaplan in a note:

Here is a pic of Illeana with the WE WERE DANCING (1942) 3-sheet poster. She had never seen this image of her grandfather, Melvyn Douglas, nor the film, which was based on a Noel Coward play and was Norma Shearer’s penultimate movie. It’s very rare to see a full-length dancing couple on a three sheet. The poster artist is Vincentini (Ted Ireland).