It wasn’t a surprising announcement but a pleasant piece of news nonetheless to learn of strong recognition for a well qualified woman of the arts today. Jodee Nimerichter, long associated with the historic and esteemed American Dance Festival (ADF), was named as director of the 79-year-running summer dance festival.

Nimerichter will be the first woman to direct ADF solely in 43 years. The festival was begun by a woman, Martha Hill (photo below-left), at Vermont’s Bennington College in the early 1930s.

ADF is strongly linked with four great modern dance pioneers, three of them female pioneers of the art form: Martha Graham, Hanya Holm, Doris Humphrey, and Charles Weidman, all who performed and taught there.

Many in the dance profession have been dismayed by the diminishing number of women occupying key positions in the field. Nimerichter has a strong corollary in Ella Baff, who rules the roost at Jacob’s Pillow Dance Festival in the Berkshires. This set-up is terrific. 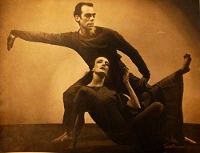 Nimerichter served as associate director and co-director of the Duke University-based festival since 2007, working closely with Charles L. Reinhart who ran the summer festival for 43 years but stepped down last year.

She has clocked twenty years with the Festival (with a brief hiatus in 1999 – 2002 to work in public television) in numerous capacities, beginning as an intern and working her way up to Director of International Programs, where she helped further the ADF’s mission to advance modern dance on an international platform.

In 1997 Nimerichter was the associate producer of the ADF’s Emmy Award-Winning Series Free to Dance, a documentary that honored the African-American presence in modern dance, and ten years later, in 2007, she produced the ADF’s Dancing in the Light program for PBS that showcased six historic works by African-American choreographers including Katherine Dunham, Talley Beatty, and Bill T. Jones. She went on to work for New York’s Thirteen/WNET as a production member of the Great Performances: Dance in America series from 1999-2003 and in 2003 returned to ADF.