A Paul Taylor premiere at ADF, always a joyous event

The Paul Taylor Dance Company announced today that its upcoming 2011-12 three-week New York season will be held at the David H. Koch Theater at Lincoln Center from March 13  – April 1, 2012. “I am looking forward to seeing my amazing dancers perform on stage at Lincoln Center, a spectacular theater,” said Paul Taylor. Kudos to Taylor and to Lincoln Center for this marvelous recognition of an artist’s life achievement! 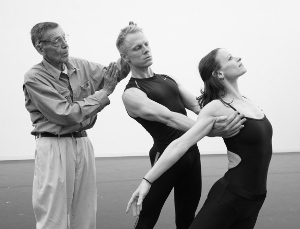 It takes a village to foster a new dance work. That’s something Charles Reinhart, who retires as director of the American Dance Festival after this season, understands better than most.

But it takes the village elder to birth the baby, and that’s where Paul Taylor comes in. Revered in the dance world, he’s America’s last surviving third-generation modern-dance choreographer. Taylor celebrates his 81st birthday on July 29. My guess is he’ll spend it working.

Taylor’s newest piece, The Uncommitted, an ADF commission and his 18th work to premiere at the summer festival, makes headline news not just because Taylor still churns and burns as an artist. That counts too. It’s because he still has it going on. 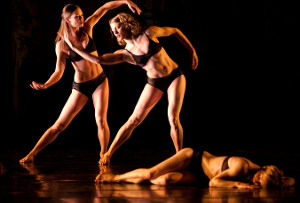 At San Francisco’s Yerba Buena Performing Arts Center in April, I loved Brief Encounters from 2009. Works from 2010, Also Playing and Three Dubious Memories, were less strong, but it matters not; they’re still significant and emblematic of the native Pittsburgher’s naughty wit and zesty physicality. I’d rather watch anything Paul Taylor touched than do much else.

The Uncommitted, with its classic Taylor title that portends social commentary, gets its look and feel from the choreographer’s stalwart production design team: Santo Loquasto, set and costumes, and Jennifer Tipton, lighting design. Music is by Arvo Pärt.

The work honors Reinhart, who managed the Taylor company for six years before becoming the devoted director of the summer dance festival in 1968. What a legacy of service to dance! ADF’s roots date to the late 1930s at Vermont’s Bennington College, before moving to Connecticut College, and finally, to its current home at Duke University since 1977. All told, the venerable ADF is in its 78th season.

It was my pleasure, in 2009, to spend three weeks on the Duke campus as a fellow in the NEA’s Arts Journalism Institute for dance criticism. Reinhart hosted our group of writers at his lovely home the opening evening of our three-week stay. A wonderful memory.