Wicked comedy by Lubitsch at LACMA 1

It was pure pleasure, in the waning days of the LACMA weekend classic film series, as curator Ian Birnie trotted out yet another sublime film pairing, this time a comedy duo: the first film, Preston Sturges’ social commentary/classic, “Sullivan’s Travels,” topped by Ernst Lubitsch’s insane, zany, perfectly scripted, outrageous and brilliant “To Be or Not to Be.” 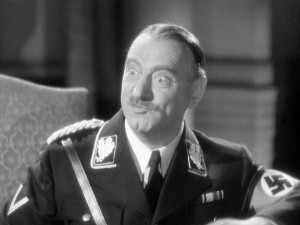 Starring the great Jack Benny and the precious Carole Lombard, who died horribly in an airplane crash two months after the film’s completion, “To Be …” is the funniest movie I’ve ever seen in my life, full stop.

Anyone who passed Friday evening at the funky-friendly Bing Theater will explode in laughter at the sight of the guy at right. Sig Ruman, who cut his comic teeth working with the Marx Brothers, plays a hard-striving Nazi functionary who grows increasingly flummoxed as a group of wily Polish actors outfox him and his Fuhrer (“Heil, me!”)

Linking these two movies are indelible threads, delicious connections for the audience. Both films:

In the coup de grace, in “Sullivan,” Veronica Lake plays a striving Hollywood actress who yearns to be introduced to Lubitsch.

Ian — what a masterful duo. Thank you, thank you.

One comment on “Wicked comedy by Lubitsch at LACMA”