When Michael Jackson died in June 2009, I was attending a three-week symposium for dance critics run by the National Endowment for the Arts at Duke University — an honor. This so-called dance criticism “Institute,” staged annually at the American Dance Festival, was think-tank focused on dance as an art form — geared for specialists who deeply care about the subject.

[The NEA institutes are now defunct, we can’t afford ’em any more; the nation is too poor.] 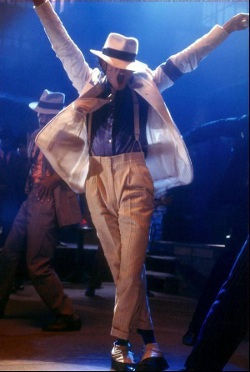 One early evening after class, I learned from the Internet that Michael Jackson had died. Fifteen minutes later, in an extreme state of distress, I shocked myself (and my roommate) by heaving onto my bed and sobbing. Deeply affected, as well, were several other writers in the group.

You’d think that Michael Jackson, dancer, would be the subject of the following day’s discourse. Though “untrained,” Jackson was one of the twentieth century’s greatest performers, further greatest dancers. He was responsible for putting more eyes on the moving body than every ballet company combined, and here we had all been living concurrent to him. But there was barely mention of his death — the minimum. Instead we plodded through our daily dissection of the greats — Merce Cunningham, Mark Morris, and whomever was the new kid on view in the downtown Manhattan scene.

MJ’s messy personal problems, yes, off putting. But frankly, it’s the “pop” in the King of Pop’s royal title that put him beyond our critical consideration.

Michael Jackson, I am very sorry that the dance establishment with which I have been associated did not appreciate or acknowledge your greatness as a dancer — the power of how you moved your body, your allure and influence. Recently viewing “This is It,” Kenny Ortega’s aptly named rehearsal documentary and seeing how music and movement poured from your slender frame as naturally as breathing, I was thunderstruck. I saw in you “one of us,” that is, a versatile, exacting and disciplined artist, the caliber of pure creative energy I’m on the hunt for at the theater five nights a week. Why attend the Music Center? Why not just stay home and watch MJ videos?

Visible in “This is It”: a performer brimming with talent and music and dance chops beyond description, as well as deep concern for his audience. His screwed-up life and sordid death — a terrible sad waste and not my focus.

I increasingly find the divide between the so-called commercial and ‘art-world’ dance to be stupid, irrelevant and bad for dance. The game changer for me was Jack Cole, the original crossover guy who morphed from the arty world of Denishawn into a full-blooded commercial creature, choreographing in film and night club. Just this evening, I saw ballet choreographer Jerome Robbins’s incredible dance tableaux in “West Side Story” projected onto the big screen. I loved sitting in an audience palpably galvanized by dance, thrilled by it. Dance, unabashedly popular, explosive, unapologetic!

Please enjoy the clips of MJ dancing — he and his collaborators made video dance into an art form. And don’t feel embarrassed if you like ’em a lot. MJ was great. You would have loved him in downtown Manhattan, even at The Kitchen. In fact, the artistic descendant of Michael Jackson, Kyle Abraham, performs there in a few weeks.