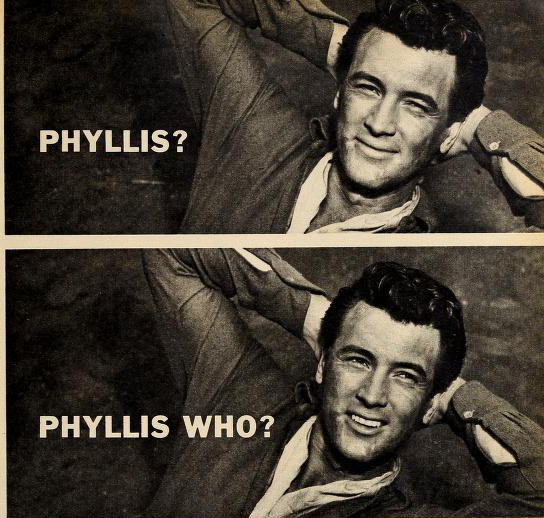 Ed. note: Can a writer and her editors truly be so clueless? Or was this ‘hetero-normative’ article, excerpted below, part of the Hollywood cabal to cover up Hudson’s gayness? Whatever was the case, writer Jane Wilkie by-lined the following interview with Rock Hudson in ‘Modern Screen’ magazine, December 1954.  Excerpted here. 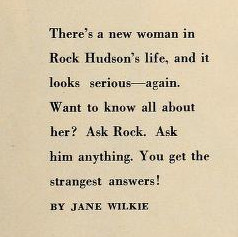 Well sir, there I was again. Confronting Rock Hudson across a white tablecloth, and filled with despair. Not that it’s bad, being confronted with six feet, four inches of all that. You can’t hardly get them kind no more.

He had come to the restaurant straight from his role of gardener in All That Heaven Allows. He wore a sad sport shirt, a used suede jacket and tired denim trousers. The make-up department had tried to make him look dirty, but one of the nice things about Rock is that he can’t look dirty.

The reason for my doldrums was that I had to come up with considerable information about Rock’s latest and greatest date, Phyllis Gates. All Hollywood knows Rock is squiring Miss Gates, and all Hollywood also knows Rock prefers not to talk about it. And so all Hollywood is trying to find out about it. 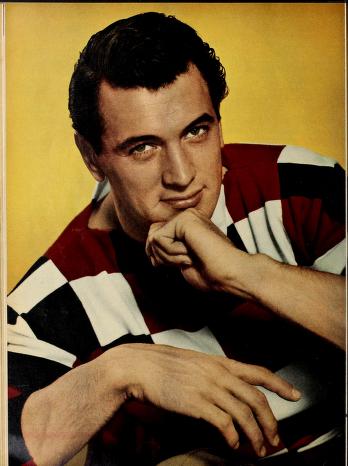 I skirted the issue temporarily. “There’s always Christmas and Thanksgiving. What did you do Thanksgiving?”

“Went over to my mother’s.”

When Rock makes a statement during an interview, the period at the end of his sentence looms larger than the moon. It is as if he had just closed the whole interview.

“What did you do on Christmas?”

He smiled engagingly. “I went over to my mother’s.”

“Did anybody ever tell you you’re great copy? What did you do New Year’s Eve?
Don’t tell me you spent New Year’s Eve with your family!”

He looked at the ceiling, thinking. “Went to two — no three — parties. Got home at three a.m.”

That about took care of the holidays. Except for one. “Valentine’s Day?” I ventured. “Is there any Statement you’d care to make about Phyllis?”

“Phyllis?” he said vaguely. “Phyllis who?”

He laughed then and I felt sorry for him. We have spent many hours over assorted tablecloths, sparring with each other. For years I’ve been trying to find out what he’s like and have gathered the distinct impression that I never will, but the situation is eased by the fact that Rock does his best, in his inimitable way, to help me. We have fun. You might even say he trusts me. Which makes my work tough.

The fish bowl existence of a film star is not for Rock Hudson. He views his work seriously, more seriously than most, but he has the understandable wish to keep himself to himself. He will tell you what he eats for breakfast, but he will not tell you what he thinks while he’s eating breakfast. If he feels so strongly about such everyday things, it is conceivable that he’ is unwilling to exhibit the things that are closest to his heart. Phyllis Gates may possibly be one of these things. I had no intention of asking him, partly because I knew he wouldn’t answer, mostly because it’s no fun to needle somebody you like.

The reason for his reticence is quite obvious. His late romance with Betty Abbott is a thing of the past, very possibly because of too much publicity. A man can’t court a girl, and make up his mind while he’s courting her whether or not he wants to marry her, when the press is devoting long paragraphs to the pros and cons of the situation. If he should decide he doesn’t want to marry her, it’s a rather good bet by that time the girl will have believed the publicity and figured he ought to. Currently, Betty Abbott is dating Jeff Chandler and would seem to be quite happy about the whole thing.

With Phyllis, he is in the same potential danger. And understanding this — well sir, there I was.

“Gates,” I said. “Her name is Gates. Now look, I’m not going to ask any impertinent questions, but at this point I can’t very well ignore the subject. I’m supposed to be a reporter.”

“Some psychology,” I said. I’m not hinting — I’m telling you. I won’t ask about your intentions, but I think I might be able to say something about this girl. What does she look like?”

“Well, she has two eyes, two ears, two legs, two arms and a body.” On this last, his eyebrows raised ever so slightly.

“I understand she does,” I said. “She goes to a doctor here in town and whenever she leaves, he makes large wolf noises.” 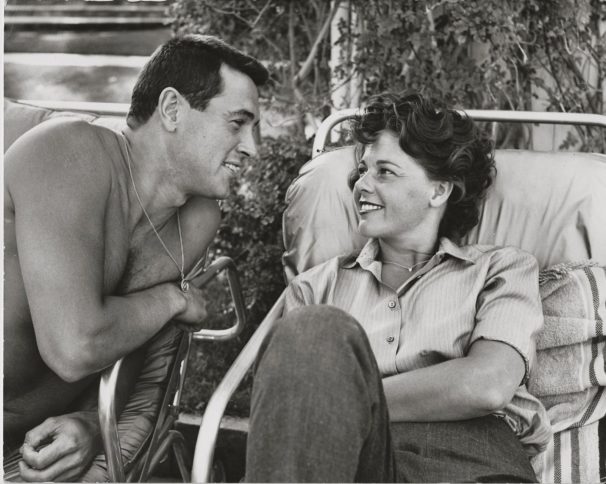 Nonsense, said a cameraman who knew all three. Maria is a terrific kid, but Rock hardly knows her. A couple of dates, a few dinners at the Danelli Roof, however romantic, don’t constitute a romance. And if Rock were the impressionable type, why would he have been going with Betty all this time? Being a script-girl takes brains and efficiency— but it’s not likely to send autograph- hunters into a tizzy. If Rock wanted to be impressed, aren’t there enough glamour girls in Hollywood to do it? What he looks for in a girl, he said, is obviously the girl.

No, there’s something far more important, far deeper, involved than a few evenings with Another Woman. One of Rock’s closest friends takes the floor.

“You can believe it or not, but Rock was nowhere near as close to marriage as people thought. He admires and respects Betty very much. They might, in time, reach an understanding. But the understanding right now is that Rock is very
much a bachelor and intends to stay that way, concentrating on his career, which is at its peak.

“Knowing Rock, I’d say his chances of marrying Countess Maria are as good as the possibility that he might leap to the altar with Betty. Rock is not the leaping type. I know that he likes Maria very much, but I think it’s a safe bet that he
will be as single this time next year as he is now!”

It sounds like sense, so the discussion takes it from there. Rock’s career is undeniably growing by leaps and bounds.

He’s no longer just a teen-agers’ idol—however exciting that may be. He’s an actor now, a good one, in demand for roles that take more than a beefcake build and a strong, handsome face. And to those who. knew Rock during that whole, memorable; European-Irish stay, there have been changes made in more than his career.-Rock Hudson, the man, is growing just as fast!

ed. note: An accounting of Hudson being blackmailed by another fan magazine, ‘Confidential,’ and his soon-after marriage to Phyllis Gates — and divorce three years later — may be found in his Wikipedia listing. Rest in peace.