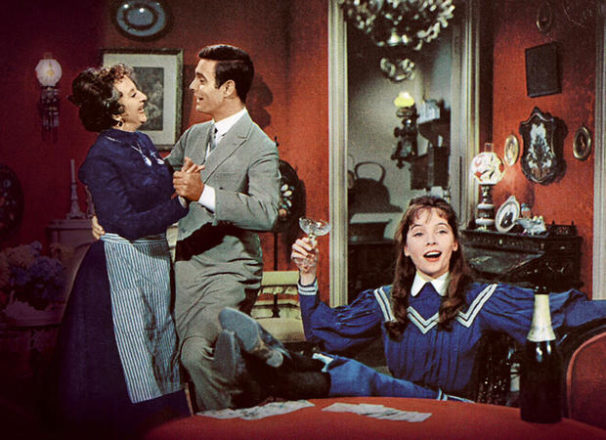 At 60, she’s still charming the gents. You’ll soon see why. As played by the winsome Leslie Caron in one of the most beloved and acclaimed musicals of all time, Laemmle Anniversary Classics is throwing her a birthday party. Since they already invented champagne, that should be the drink of choice at the Dec 8 screening event of ‘Gigi.’

I have long believed that this movie, an original musical developed by producer Arthur Freed at MGM, would have benefited tremendously from original dance numbers by Jack Cole. He was then, and remains, the most sophisticated of Hollywood choreographers, and he was then working at the studio. He had just completed sensational French-themed dances for ‘Les Girls’ (1957), and had worked with both Leslie Caron and Mel Ferrar on ‘Lili’ (1953). He had completed two movies with Vincente Minnelli, ‘Kismet’ (1955) and “Designing Woman” (1957). So why no period-drenched, deeply researched, highly sexual and alluring Jack Cole dance numbers in ‘Gigi’? Quel dommage!

The film’s very basic choreography, which is to say highly disappointing generic stuff, was instead done by the former Jack Cole dancer, Alex Romero, who was then working at MGM. The serviceable staging of “The Night They Invented Champagne” was done as a favor to Freed by Charles Walters. When the picture ran into trouble, and Minnelli was unavailable, Walters reshot several scenes as an uncredited director.

Awards included Best Picture, Best Director Vincente Minnelli, Best Adapted Screenplay by Alan Jay Lerner, and Best Scoring by Andre Previn of the original songs by Lerner and his frequent collaborator, Frederick Loewe. Predating the Oscar run-through by West Side Story in 1961, ‘Gigi,’ in 1959, won the most Oscars ever awarded to a single film. It also has the distinction of being one of only three films in cinema history to win every Oscar for which it was nominated.

‘Gigi’ was perhaps the last great musical created for the screen. Produced by Arthur Freed for MGM, it follows in the tradition of other original musicals sponsored by the Freed unit, including ‘Meet Me in St. Louis,’ ‘Singin’ in the Rain,’ ‘The Band Wagon,’ and an earlier best picture winner, ‘An American in Paris,’ which was also directed by Minnelli and written by Lerner.

After ‘Gigi,’ almost all the memorable Hollywood musicals were adapted from Broadway like ‘West Side Story,’ ‘My Fair Lady,’ ‘The Sound of Music,’ ‘Oliver!,’ and ‘Cabaret.’ 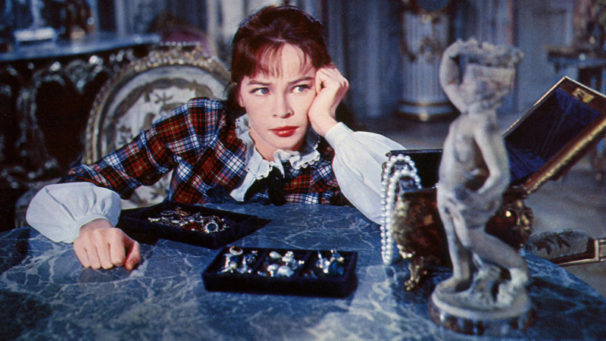 The 1944 novella by Colette told the story of a young woman groomed by her grandmother and great-aunt to be a courtesan in turn-of-the-century Paris. Censorship was just beginning to loosen in Hollywood, and Freed and Lerner felt they could mask the sordid subject with song and dance to sufficiently get by with it.

Co-starring with Caron were Louis Jourdan, Maurice Chevalier (who earned an honorary Oscar that year), Hermione Gingold, Eva Gabor, and Isabel Jeans. The score includes the Oscar-winning title song, the lively “The Night They Invented Champagne,” and a memorable duet by Chevalier and Gingold, “I Remember It Well.” The film also won awards for cinematography, production design, and for the elegant costumes by the brilliant Cecil Beaton. 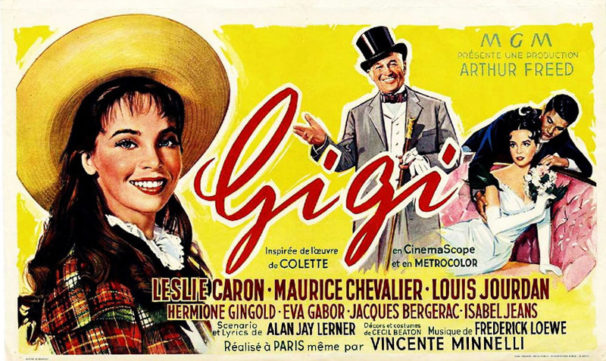