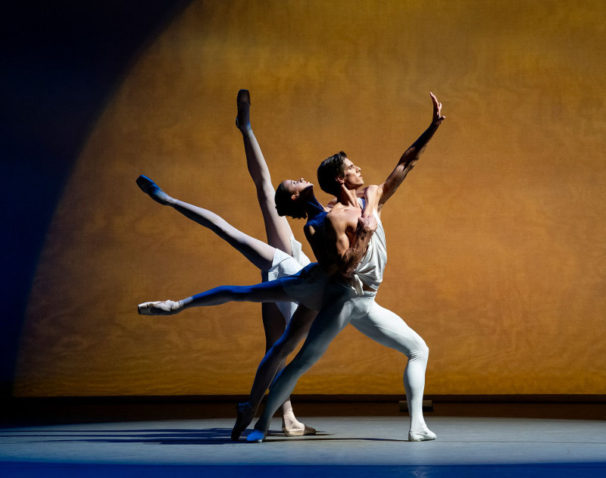 The elegant brochure and historical resonance of Balanchine: The City Center Years generated great promise as a highly anticipated event marking the 75th anniversary of midtown Manhattan’s richly dance-historic theater. The six-performance festival (Oct 31 – Nov 4, 2018), which showcased an array of landmark Balanchine works performed on the stage where nearly all had their premieres, did prove to be a highlight of New York’s busy autumn dance season.

Eight companies – five American, three from overseas – shared the City Center stage in programs that suggested the excitement of the era (1948-1964) when the city’s ballet lovers and intelligentsia devotedly gathered to witness the birth and early flowering of the New York City Ballet. With City Center as its reliable home base, and seasons that were regularly scheduled (if far shorter that today’s), the company entered its now-iconic era, with both Balanchine and Jerome Robbins creating at a prolific pace. As this Festival illustrated, an impressive number of works first seen on the City Center stage have not only remained in NYCB’s repertory but are performed internationally.

The week was primarily a showcase for the Americans, who delivered the Festivals more substantial fare. From overseas came representatives of the Royal, Mariinsky and Paris Opera Ballets to contribute pas de deux. The Mariinsky also fielded a cast of Apollo (1928) in its post-1979 truncated form. (Francia Russell, the Los Angeles-born former NYCB ballerina and acclaimed stager of Balanchine works, staged both works performed by the Russians.) 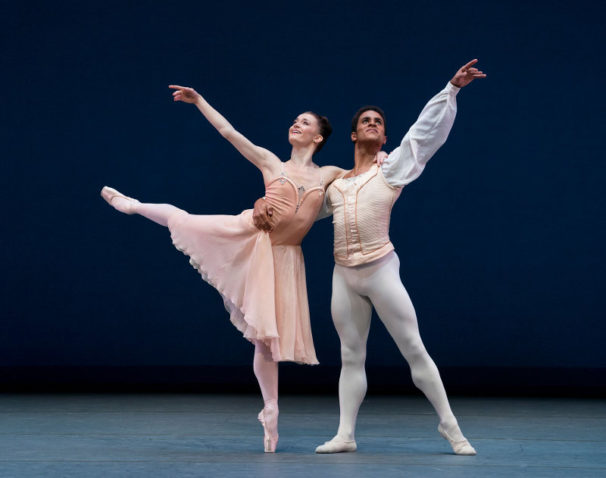 Tchaikovsky Pas de Deux (1960), as performed by the Mariinsky’s Viktoria Tereshkina and Kimin Kim, became an old-fashioned showpiece in which the dancers seemed isolated in separate worlds, each aiming to please the audience but not connecting harmoniously with each other – or the music. Kim’s suspended leaps inspired admiring gasps from even jaded balletomanes, but his steps were sometimes altered and oddly paced. She was decorous and charming, but made her choreography look tame.

During a pre-Festival City Center Studio 5 event, Heather Watts coached NYCB’s brilliant Tiler Peck through an array of Balanchine excerpts including the opening of this very work (with Roman Mejia). With the fresh memory of all the expansiveness, daring and musical wit that Watts drew from them, this Mariinsky version looked ultimately cautious by comparison.

While Apollo, premiered in 1928, dates from a much earlier era of Balanchine’s career, it was during the City Center years (with Jacques d’Amboise as its leading interpreter) that it became a NYCB repertory mainstay. The complete version, with the birth scene and set, was performed during that era. At the Festival, its later incarnation received an interesting but disjointed interpretation by the British Mariinsky principal Xander Parrish in the title role, with Maria Khoreva, Anastasia Nuikina and Daria Ionova as his muses. 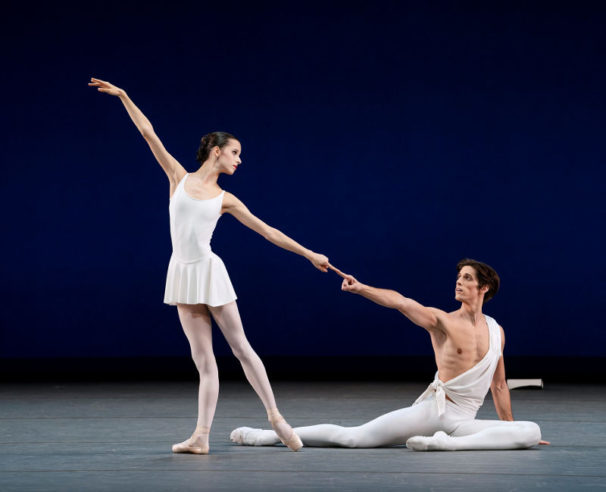 Parrish, with his heroic physique, looked every inch a young god. His opening solo included unfamiliar jagged gestures with his lyre, and he was over-emphatic in his reactions during the muses’ solos. Given all the mutations and re-interpretations of this ballet over many decades, it’s possible the way he had been coached was closer to what 1950s audiences might have seen. Khoreva, the Terpsichore, gave her steps an inner life and logic that the other two women could not equal. 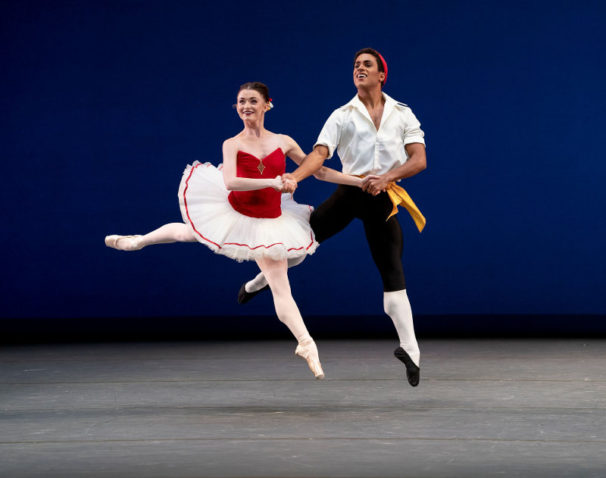 The Royal Ballet sent a youthful duo: soloist Anna Rose O’Sullivan and first soloist Marcelino Sambė in Tarantella, the cheeky 1964 showpiece that was the last work Balanchine created before NYCB moved to Lincoln Center. Sambė charged through with a swaggering good cheer that felt appropriate for a role tailored to the talent and personality of the young Edward Villella. O’Sullivan was pert and determinedly charming, capturing some of the wit but none of the Italian-flavored robustness.

Paris Opera Ballet, represented by Sae-Eun Park and Hugo Marchand, performed two contrasting excerpts that were not seen to best advantage out of context. In the glorious duet that is the beating heart of A Midsummer Night’s Dream‘s second-act divertissement, Marchand radiated romantic ardor and elegant chivalry, but Park looked withdrawn. The duet’s achingly beautiful moments failed to resonate fully. The two were much better matched, and more fearless, in the pas de deux from Agon (1957) staged by Paul Boos – confident, bold, delighting in their mutual risk-taking.

A report on the Festival’s American contingent will appear in part two.