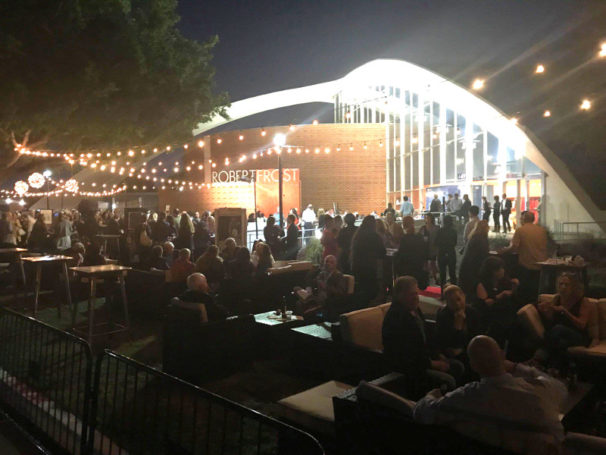 What if you threw an old-fashioned block party and half of Culver City, California, attended? That’s what happened Saturday night at a joyous occasion: the grand re-opening/fundraiser for a newly refurbished landmark building, the Robert Frost Auditorium — a rare gem of Southern Californian mid-century-modern architecture. Cozy, yet imposing, the curvilinear structure houses a 1,200-seat auditorium that will serve as a venue for K-12 kids to perform. Plus it will earn its keep as a rental facility for performing arts events. 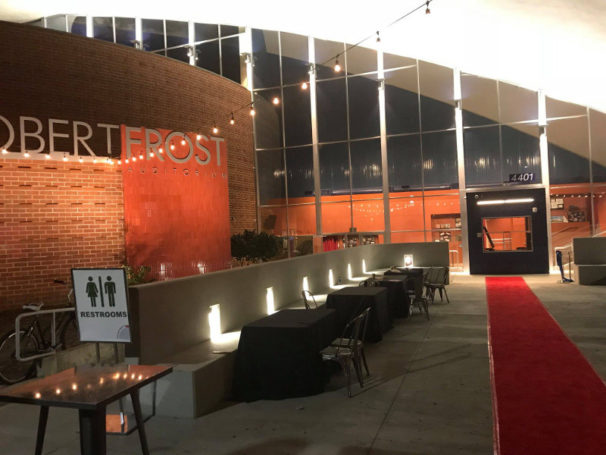 The Frost has been a mid-century architectural treasure since its opening in 1964 — and in constant use. But like many of us who have been hanging around since then, it grew worse for the wear and tear. 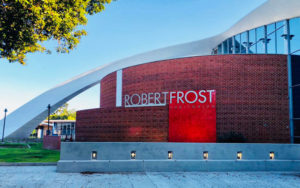 Think of a flying saucer that got intercepted on its way to nearby SONY Pictures, but beamed down instead on the campus of Culver City High School. Its safe landing was thanks to the perseverance of a young architect named Andrew Nasser, who somehow wrangled his edgy concept design by his bosses at Flewelling and Moody. The thing got built! It flaunted an organic modern style and featured a ground-to-roof black glass façade, non-ornamental brick exterior and distinctive semi-circular pleated reinforced concrete roof.

Woody Allen liked the Frost so well, he used it as a filming location in SLEEPER. 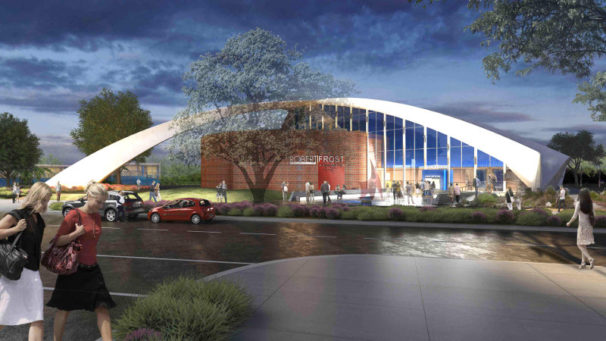 It was joyful to have Mr. Nasser in the house to witness the innate elegance and kooky marvel of his structure again appreciated. Also present were refurbishment architects Craig Hodgetts and Ming Fung, principals of Culver City-based Hodgetts + Fung, who clearly clocked hours in hardhat and dusty boots to oversee some serious gussying up —  not to mention the implementation of necessary structural and environmental upgrades.

A fun, inaugural variety show spooled — replete with talented kids, song, dance, live orchestra, a cool video, and, wow, poetry at a facility named for a poet! Two funny emcees, Howard and Elaine Behnken, demonstrated the many theatrical gizmos and build-ins that will help the Frost succeed.

VIPs of all stakeholders stepped onto the wide-spanning stage for earnest speechifying and community cheering. Special recognition went to Janice Pober, who for many years has presided over a generous and thoughtful public-private community-funding program at Sony Pictures.

Culver City Mayor Thomas Small, who after his City Hall hours serves as a consultant in urban planning/architecture, called the Frost, “daring, modern, historic and innovative, all at the same time.” Mayor Small, who Saturday night derived special pleasure having championed the Frost refurbishment project since 2016, said, “The Robert Frost auditorium is the quintessence of Culver City, a jewel in the crown of our architectural heritage.”